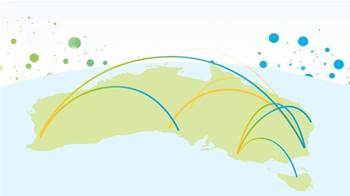 Amaysim claims it will enter the NBN market with “one of the most generous contention ratios” of any provider, and will further improve speeds by building its own links to select NBN points-of-interconnect.

The mobile virtual network operator (MVNO) today launched itself as an NBN reseller, offering both fixed and fixed wireless services at all 121 points-of-interconnect (PoIs) nationally.

A PoI is where retail ISPs plug their network into the NBN. The contention ratio is determined by the amount of users sharing data capacity coming into the PoI.

Commercial director of broadband, Rob Appel, told iTnews that Amaysim is building a “hybrid network” – consisting of its own and third-party backhaul links – to provide NBN services nationally.

At first, the company will rely on wholesale aggregation services provided by AAPT and Optus to service NBN customers.

It inherited the relationship with AAPT via its acquisition of small ISP AusBBS last year, while it has “a very deep relationship with Optus on mobile”, underpinning its MVNO services and which it has now extended.

“That allows us to get the nationwide coverage straight away,” Appel said.

“But as we build scale, we’ll be building out directly to the PoI. [But of course] there will be certain PoIs that it will never make sense for us to go direct to.

“What we’re doing is structuring the network to get the most cost effective and best quality of service for each area. We’re rolling out in line with our mobile customer base, so targeting the areas that have high density for our existing base.”

Appel said that as the direct-to-PoI rollout progressed, it would give Amaysim greater control over the amount of connectivity virtual circuit (CVC) it could provision.

CVC affects the amount of bandwidth available to end users.

NBN Co has spent the past year trying to adjust its pricing construct to encourage ISPs to buy more, thereby improving the performance of services. There are also regulatory moves underway to expose how ISPs compare when it comes to actual speeds experienced by end users.

Appel said Amaysim “will go into the market as one of the most generous providers when you look at contention overall”, though he did not reveal the actual contention ratio on offer.

He said Amaysim worked with suppliers to identify contention in their networks.

“We have assurances there won’t be congestion at the PoI,” he said.

He said Amaysim had also focused on “the link out to the internet, which is the second bottleneck and often where ISPs that are highly contended are making their customers suffer".

Amaysim will initially cross-sell NBN services into the 750,000 households that either take MVNO or energy services from it.

Appel said the company had focused on creating plans that were easy to understand and sign up to. The company unveiled its three-tier product offering back in February, ranging from $60 to $90 a month, and available – like its phone plans – on a month-to-month basis.

“On the straight monthly plan rates we’re towards the bottom of the market in terms of price,” Appel said.

“We’re not the cheapest of the cheap but we don’t want to be running a network that’s not quality at the same time.”

Appel criticised large NBN wholesalers and retailers for attempting to maintain old product constructs – and margin – in an NBN world.

He told iTnews he wanted to see those “little fees and contract structures” neutralised.

“The whole internet market has been built around 24 month contracts,” Appel said.

“The carriers build their projection models and margins around retaining a customer for 24 months and beyond; they’ve got all their marketing activities and fee structures built around that.

“If you take a 24 month contract, you’ll get a cheap but free modem and a free setup, but if you want flexibility you’ll have to pay for it.”

However, Appel said, NBN Co did not levy fees on flexibility.

“There’s no setup fee at wholesale from NBN, there’s no termination fee for individual services from NBN and there’s no fee to change speeds from NBN,” he said.

“But in many cases the big carriers are maintaining those fees to their retail customers and they’re also maintaining it at a wholesale level, so not only are they keeping their customers on that regime, they’re forcing others to do the same.

“That’s where we think there’s a lot of room for improvement.”

Appel said Amaysim would not serve NBN satellite customers, though he did not rule it out in future.