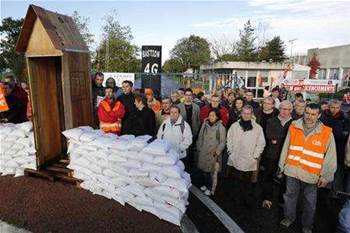 Alcatel-Lucent is exploring the sale of a division that sells switches and communications gear to corporate clients, part of the French company's efforts to shed €1 billion (A$1.42 billion) worth of assets by 2015, according to people familiar with the matter.

The company, which is in the midst of a turnaround and debt-reduction plan under chief executive Michel Combes, has brought in Lazard to help find a buyer for its enterprise business, the sources said.

It marks the second time in three years that the telecom equipment maker has tried to sell the underperforming division.

In 2011 it explored a sale of the entire enterprise business but found no takers. It ended up selling only the still-growing part of the division — call centre software unit Genesys — to private equity firm Permira for US$1.5 billion.

At the time, potential buyers were put off by the corporate telephony part of the enterprise business, which was losing money and weighed down with too many workers in Europe.

A spokesman for Alcatel-Lucent declined to comment on whether the enterprise business was on the block again.

A Lazard spokesperson did not immediately respond to requests for comment. The sources asked not to be named because the matter is not public.

Combes recently said the group was "actively working" on asset sales, and also announced a capital increase and high-yield bond to raise US$2 billion.

The moves are intended to strengthen the money-losing French group's finances and keep it competitive against larger rivals including Ericsson, Huawei  and Nokia's equipment unit NSN.

Alcatel does not disclose the revenue from its enterprise activity. It said sales to corporate clients and government brought in €959 million last year, while analysts say the enterprise business is likely losing money.

Several headwinds facing the unit make it unlikely that industry peers — such as Avaya, Mitel Networks and Unify (formerly Siemens Enterprise Communications) — or private equity firms will aggressively step up for a deal, according to the sources.

The main challenge for buyers is having to absorb the costs associated with pension obligations. During the unsuccessful sale process in 2011, buyers balked at the expense of restructuring the legacy voice business, which is based in Europe and involves unionised labor.

In addition, competitors such as RingCentral and 8x8, which provide more cloud-based phone services, have been taking market share and could make Alcatel-Lucent's patent portfolio in its enterprise unit seem outdated, one of the sources said.

Very few parties, if any, would likely pursue the enterprise unit as a whole, the sources said.

Janardan Menon, an analyst at Liberum Capital, wrote in a recent note that Alcatel-Lucent could achieve "significantly higher margins" through a sale of unprofitable business lines such as enterprise.

"A key part of the Alcatel-Lucent investment thesis revolves around its potential sale of assets," said Menon.

The potential divestment comes as the telecom equipment sector could be headed for another round of consolidation. Nokia has been weighing whether to seek a tie-up with Alcatel or purchase its wireless assets, Reuters has reported.

Nokia is in the process of selling its handset business to Microsoft for US$7.2 billion, and will be left with a mapping software unit, a portfolio of patents and its network equipment business, Nokia Solutions and Networks (NSN).

A combination with Alcatel-Lucent would increase NSN's market share in the global wireless infrastructure market from 18 percent to more than 30 percent, leapfrogging Huawei and closing in on Ericsson, according to analyst data.