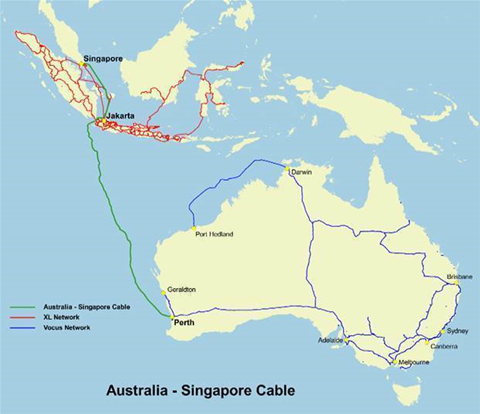 Spanning 4600 kilometres, the Australia Singapore Cable has a design capacity of 40 Tbps with an expected 20-year service life. Vocus said it has received permission from Singapore authorities to land the cable.

The Australian backbone network provider will partner with Indonesian telco XL Axiata to land the ASC in that country, and use its nationwide domestic transmission network.

The ASC was first mooted in 2011 but has struggled to find enough funding to allow the project build to commence.

Last year Vocus announced a partnership with NextGen to form a 50-50 joint venture to build the ASC (Vocus bought NextGen in 2016) and started looking for backers for the ASC, which was then costed at US$130 million.

Vocus now says the ASC will cost around US$170 million to build. Alcatel-Lucent will be paid US$130 million, and the Ontario Teachers Pension fund will be handed US$20 million upon construction completion in 2018. There is also a US$20 million civil works cost for the ASC, Vocus said.

Vocus said the ASC will be funded through debt next year, and by operating cash flow in 2018. Vocus also expects to receive US$100 million in customer prepayments for indefeasible rights of use (IRU) agreements for the link.

The ASC faces competion from Subpartners' APX-West cable system, which in March this year said it was ready to get cracking with its US$100 million, 4500 kilometre cable between Perth and Singapore.

A third link, the Trident Subsea Cable, is hoping to raise enough capital to build a Perth - Singapore circuit as well.