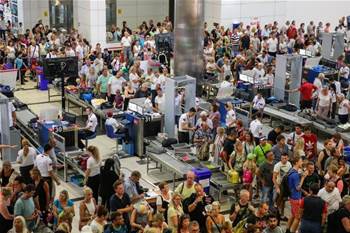 Security minus the wait.

Researchers at the Australian National University have developed an ultra-sensitive device they say could be developed into a new breed of cameras for airport security screening, which would eliminate the need for interminable queues.

The device could also lead to smaller, safer sensors for use in driverless vehicles, cutting down on the cumbersome rooftop arrays frequently seen in today’s prototypes.

The sensitivity of the device is achieved through the use of metasurfaces - ultra-compact, complex structures that can control the direction of electromagnetic waves to perform highly advanced sensing functions.

“This device can sense the entire environment surrounding it with unprecedented precision - previously, multiple fixed sensors pointing towards different directions would be required to achieve this," Liu said.

"These future cameras could identify hazardous devices or dangerous chemicals in people's carry-on baggage when they walk through an airport, without needing them to queue up and go through the various procedures that are necessary now.

"Unlike conventional cameras used in CCTV, this type of camera cannot recognise people's faces,” he added.

Lie told iTnews this is because the sensors don’t use electromagnetic waves from the visible spectrum, and instead analyses much longer wavelengths.

“It is physically very challenging to resolve the structural details of faces when the detector is working remotely,” Liu added.

The omnidirectional, hypersensitive nature of the device also means the device could also one day find itself incorporated into robots used in conditions too dangerous for humans, such as in mining or search and rescue operations.

Co-author Dr David Powell from ANU’s Nonlinear Physics Centre said the new device was the first of its kind to be arbitrarily tuneable so that it can direct electromagnetic waves towards any direction or control multiple beams to perform different functions at the same time.

"Our research provides the first theoretical and experimental demonstration that dynamic and arbitrary control of electromagnetic waves is possible," Powell said.

Liu told iTnews the device is still some years away from being deployed in airports, and will possibly be integrated with existing security camera technologies to extend their sensitivity and range of detection.

Unfortunately, while the sensors will help reduce queues as everyone awkwardly empties their bags and pockets, a device to speed up the boarding process is still a way off.