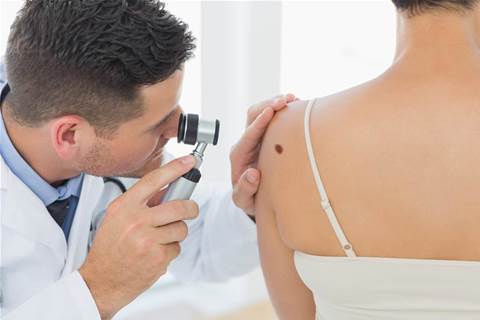 Researchers in Europe and the US have shown that a deep learning convolutional neural network is capable of more accurate skin cancer diagnoses than experienced dermatologists.

The researchers from the University of Heidelberg in Germany trained the neural network - which is modelled on biological visual processing centres in the brain - by showing it more than 100,000 images of malignant melanomas and harmless moles.

Compared to 58 dermatologists from 17 countries, the AI missed fewer melanomas and was less likely to label benign moles as dangerous.

In the first stage of the trial, dermatologists were shown “100 of the most difficult” images to test against the results of the neural network.

They were able to correctly diagnose almost 87 percent of the melanomas and 71 percent of benign lesions.

In the second stage when the doctors had access to the medical histories of patients as well as the images, their accuracy of malignant cancer diagnosis increased to almost 90 percent.

However, the neural network was able to accurately diagnose 95 percent of melanomas solely from the images.

Director of the Victorian Melanoma Service at the Alfred Hospital Dr Victoria Mar told iTnews the use of AI could be a big help in speeding up the work of dermatologists and in delivering telehealth services in remote areas.

“If AI can identify melanomas reliably and also reassure people appropriately that a benign lesion is in fact benign, it will improve timely access to [services for] those most in need,” she said.

“If this technology is integrated with 2D or 3D skin imaging machines for screening and use in telehealth it would certainly improve health service delivery to people in remote and rural areas who might not otherwise have access to skin cancer monitoring and early detection.”

Mar doesn’t think that AI will completely replace medical specialists. Rather, she said, it is likely to function as a “diagnostic aid” to streamline patient care by “filtering out images or cases that require closer attention from those that are normal”.

Mar raised concerns that AI might not perform as accurately in the real world as it did in the trials, where doctors have the advantage of being able to take patient histories and more comprehensively understand them, and also to better examine the entire skin surface.

She said that atypical skin cancers could easily be mistaken for benign conditions if they were in an area that was difficult to photograph such as in the scalp or on nails.

“Unfortunately, the less ‘typical’ melanomas tend to arise at these sites, so diagnosing these accurately with AI will be a challenge,” she said.

On the specific research paper, Mar said there is still "much more work to be done to implement this exciting technology safely into routine clinical care".