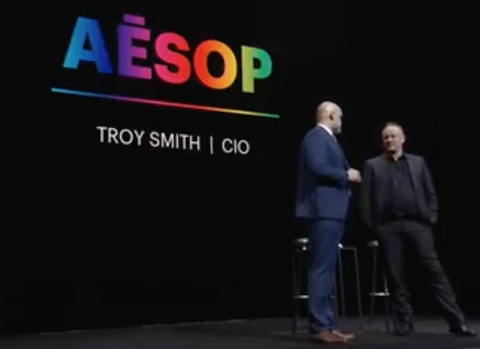 Luxury cosmetics retailer Aesop has credited a consistent global core IT model for its ability to continue to expand internationally and keep its customers happy.

Four years ago at the same event, Smith unveiled a plan to take 10 “onsite software systems” from the likes of Sage, Quickbooks and Microsoft and run that functionality instead in a single instance of NetSuite’s OneWorld product.

That instance would consolidate “financials in six languages for 11 different currencies, and automate reporting and perform cost of sales analytics in 12 countries”, the retailer said at the time.

Smith said at the time that “legacy systems spread across multiple markets were ill-equipped to deal with our international expansion plans and cracks soon began to show”.

Since then, Aesop has continued its expansion.

Smith said the company had avoided altering its “global core model” implemented via NetSuite, performing only minor localisations such as language or to meet in-country regulatory requirements.

“We try to limit our global core model,” he said.

“We used a partner - Annexa - to help us with our rollouts in Australia, America, Asia, and then we partnered directly with NetSuite Professional Services [for rollouts] in Europe.

“But what we tried to do is keep the core model tight and consistent around the globe, so that when we rolled it out all we had to worry about was localisations and adapting it for any particular market requirements that we needed.”

Smith expressed a preference for IT to simply blend into the background of its retail experience.

The company’s call to shift into a cloud-based model meant having “compliance or security issues [being] handled for us” and infrastructure “we don’t have to worry about”.

“We don’t want to focus on backend systems and stuff that doesn’t really impact how we can directly affect the customer.”

Rather, the company saw its point of difference in kitting out stores that looked completely different from one another, and on honing its customer service.

“We want the rollout of NetSuite across the organisation to be very smooth and very easy so we can focus on what matters which is our customers and getting our stores right,” Smith said.

“Every retail store we have is different - it’s not a cookie cutter approach. We use architects to design the stores to fit into the neighbourhoods in each city where the stores are located.

“So from a store rollout perspective it makes things quite difficult but we really think that sets us apart.”