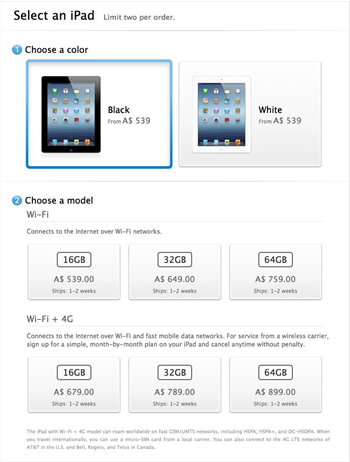 The Australian Competition and Consumer Commission (ACCC) will seek “urgent relief” from the Federal Court today to stop Apple promoting its new iPad as 4G-capable.

The competition watchdog alleged that Apple's promotions of 4G support were misleading because the devices could not be used on Australian 4G networks.

Apple has offered to reimburse customers that believed they had been misled, according to a report by The Australian.

The only mobile network in Australia that offers 4G at present is Telstra, which uses 1800 MHz spectrum, backed up in some area by HSPA+ using the 850 MHz spectrum.

Apple, however, has designed the new iPad's 4G radios to only support the 700 MHz spectrum adopted by the US’ major carriers, AT&T and Verizon.

Despite its bold use of 4G to promote the iPad worldwide, Apple does note in fine print that its 4G LTE radios are only supported by AT&T and Verizon in the US and Bell, Rogers, and Telus in Canada.

The ACCC alleged that Apple’s use of “4G” contravenes several sections of Australian Consumer Law and will seek “final orders including injunctions, pecuniary penalties, corrective advertising and refunds to consumers affected.”

“Consumers who have purchased or are considering purchasing an "iPad with WiFi + 4G" should ensure that they have a proper understanding of the mobile data networks which this iPad can directly access by a SIM card,” the ACCC said.

Australian consumers won’t be the only ones potentially misled by Apple’s 4G claims, but so far other nations’ regulators have not reacted.

Sweden’s TeliaSonera, which rolled out the world’s first 4G network, also used 1800 MHz spectrum, leaving its users in much the same Apple marketing predicament as Australians.

Comment is being sought from Swedish telecommunications and competition regulators.

Britain does not have 4G yet but is in the process [pdf] of following a European Union order to make 900 MHz and 1800 MHz spectrum available for 4G, or LTE and WiMax use.