The competition watchdog has revealed plans to revise the regulated charge of a voice call terminating on a mobile network from nine cents a minute to six cents beginning next year.

The price had first been regulated in 2004, at an initial cost of 21 cents a minute for mobile-to-mobile and fixed-to-mobile calls, with regular revisions since.

The ACCC said the draft pricing, to be finalised this year, was a "conservative estimate of the efficient cost of providing the service including a contribution to common costs". 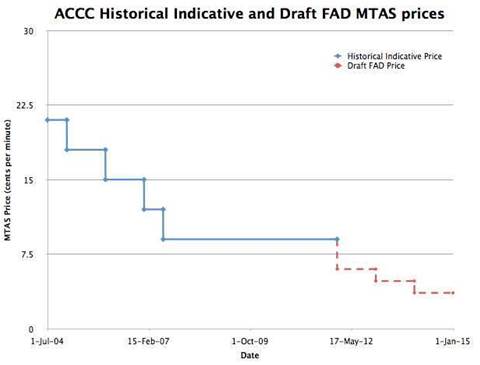 The initial 6 cent pricing confirmed estimates made by Telstra in its submission to the watchdog last month, based on international estimates.

A Telstra spokesperson said the changes were welcome.

"Telstra believes they have been too high for too long," they said.

However, the changes were potentially bad news for Optus and Vodafone Hutchison Australia, both of which had campaigned for no or minimal changes to the MTAS pricing in their respective submissions.

VHA, in particular, worried that a significant drop in the price of fixed-to-mobile termination would play into Telstra's hands.

"At the moment our biggest concern is that any fall in termination rates is just going to be a big subsidy to Telstra," chief executive Nigel Dews said at a recent financial results briefing.

"We've seen something like $1 billion of subsidy going to Telstra from the rest of the industry at the expense of customers because of the way they've dealt with fixed line pricing."

Some were also concerned that savings made by telcos as a result of the drop would not be passed on to end users.

Matthew Lobb, VHA's general manager of public policy at VHA, said the losses to customers were up to $1.1 billion between 2004 and 2010.

"There's been little evidence that this benefits [Telstra's] customers," he said. "Telstra customers making calls from their fixed lines to mobile phones have not benefited from the substantial wholesale price reductions."

The estimates, based on a cost model produced for the ACCC in 2007 by consultancy WIK, also planned to account for price changes in forthcoming Long Term Evolution networks.

Fourth generation networks in particular would spur continued drops in MTAS pricing as carrier traffic transitioned from being voice-heavy to significant data peaks from end-users.

The ACCC forecast MTAS pricing could ultimately drop to zero.

"The ACCC acknowledges that the industry in Australia may not reach that position during the period of the FAD expiring on 30 June 2014," it said.

"However, IP mobile networks do represent what a hypothetical efficient new operator would implement in the market today and therefore establish the lower bound estimate of the efficient cost of providing the MTAS."

The watchdog rescinded plans to do away with standards pricing for fixed-to-mobile and mobile-to-mobile termination prices in favour of a 'bill-and-keep' model that minimised payments to other carriers, after major telcos unanimously opposed the move.

A final determination on the issue was expected by the end of the year.