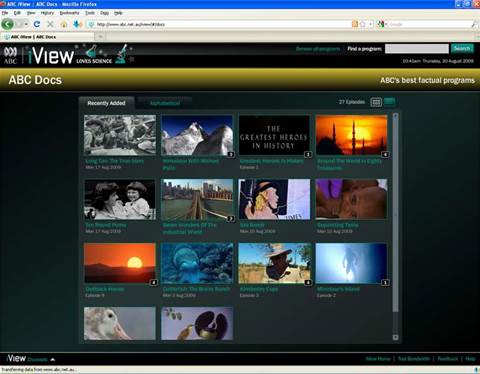 Looks to push iView content to televisions and smartphones.

The ABC is looking to partner with more Internet Service Providers (ISPs) to offer unmetered access to its free iView on-demand television portal and paid downloads from its ABC Shop Downloads online store.

The national broadcaster is investigating options to extend both platforms onto a range of new devices - all of which would be aided by unmetered access on ISP networks.

Internet Service Providers Internode, iiNet, iPrimus and Westnet all offer subscribers unmetered access to the ABC iView service. 'Unmetered' content refers to content that is not billed or included as part of a user's download limit.

Arul Baskaran, executive producer of ABC's multiplatform production told internet industry colleagues this week tha the broadcaster is looking to stream iView content live into the living room of all Australians via collaborations with Sony and other TV, set top box and console manufacturers.

Baskaran said this would require a version of the iView service that can be remotely navigated so that users don't require a keyboard or mouse to scroll through content.

The ABC is also planning a mobile phone version, he said.

Content-wise, the ABC is considering a 24-hour news service on iView and a children's version.

Robert Hutchinson, general manager of digital content development at the ABC said the broadcaster is keen to work with ISPs to offer unmetered access to downloads from the ABC Downloads Shop.

Hutchinson said the online store - which offers programs at quality equivalent to standard definition as downloads of between 250-350 megabytes, is seen within the ABC as a "replacement product" for DVDs.

Hutchinson said the ABC would particularly be interested in working with those ISPs with deep packet inspection technologies to investigate how the shop's peer-to-peer model and unmetered content might work together.

"We have been doing a little bit of testing around whether we can privilege end users on the same ISP - inside the same subnets," he said.

The service peaked in May 2009 thanks to some controversial episodes of The Chaser and Four Corners - but "didn't fall off," Baskaran said. He said 43 percent of visitors are coming back more than once a month - a figure that is closing.

"The catalyst for success is our partnerships with ISPs," he said. "Our strength lies in content. But content on its own has little value if it can't reach its intended audience."

Baskaran said iiNet, for example, is the second largest referring site to iView.

Customer feedback suggests "attention is being paid to whether it is unmetered or not", he said.