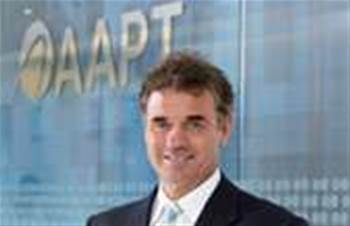 AAPT has reported earnings before interest of $24 million for the third quarter of financial year 2010, which was "flat" compared to the same quarter last year.

"The result was driven by a continued focus on removing cost from our business," AAPT chief Paul Broad said.

"EBITDA [Earnings before interest, taxation depreciation and amortisation] in Australian dollars was flat as cost reductions matched declines in revenues."

Over 40 percent of AAPT's customer base also had "at least one service on contract", Broad said.

But its focus on lowering costs "and growth in mobile and Australia" helped offset the affects of declines in traditional telecommunications revenues, chief executive Chris Quin said.

"IT services margins were preserved despite market contraction," Quin said.

"We also saw a pleasing 7 percent revenue growth and 6 percent connections growth in mobile as clients saw the strength of an integrated mobility proposition."

Telecom NZ reported an EBITDA result that was in line with previous guidance.