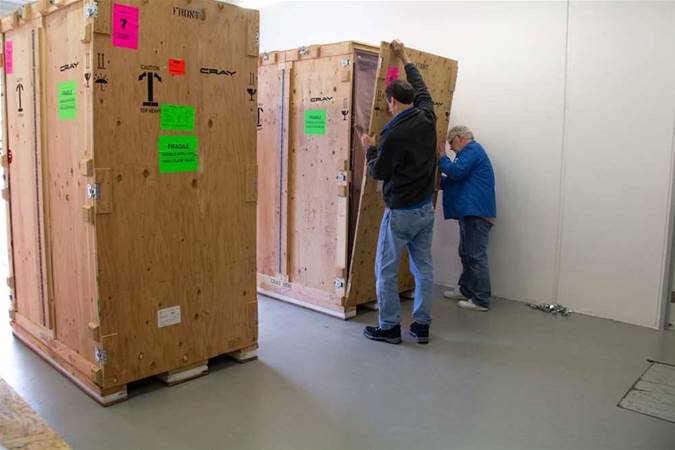 We've done unboxing of smartphones, tablets, even servers before. But supercomputers? Welcome to the Pawsey Supercomputing Centre in Perth, Western Australia, where we watched the unboxing of a machine that might well break the record for the largest supercomputer in the Southern Hemisphere. (We won't know until its switched on!) 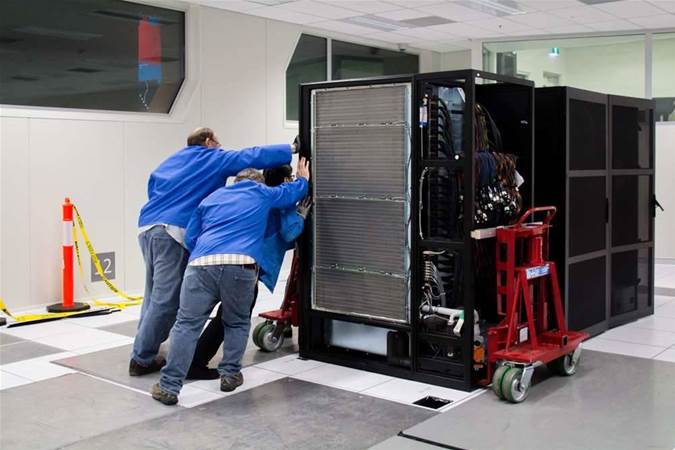 The machine being rolled in to the Pawsey Supercomputing Centre is a Cray XC30 system affectionately referred to as Magnus2. It is made up of five new cabinets and absorbs two others that previously hosted its predecessor, the Magnus1 supercomputer. Magnus2 supersedes both Magnus1 and the EPIC containerised supercomputer researchers have been using in the interim. EPIC will be decommissioned at the end of the year.

Each of these seven cabinets weighs about 1.4 tonnes. 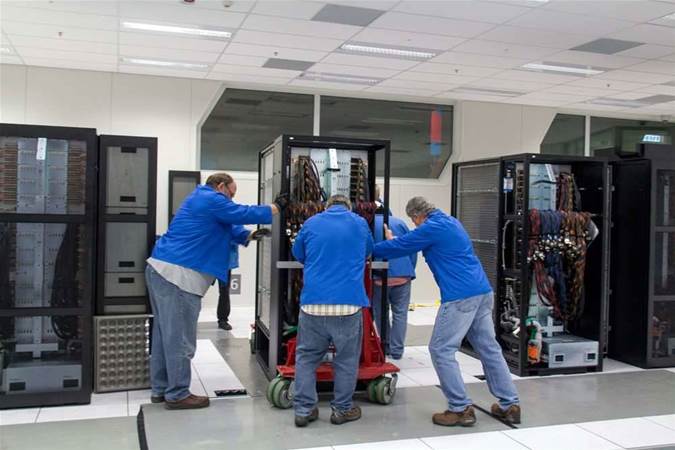 Magnus2 really pumps up Pawsey's processing power - its 35,000 cores will drive over 1 petaflop of computing power. That's one quadrillion mathematical computations per second. (But it'll still be 30-50 times less powerful than the world's biggest beast, the Tianhe II run by China's Defense department.) 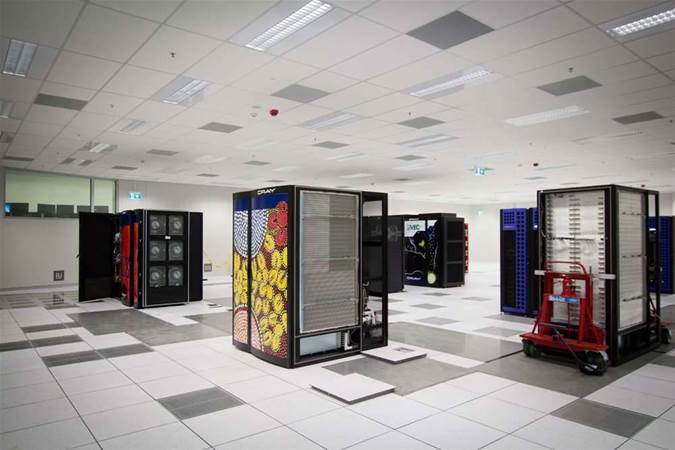 Magnus1 (at the left and rear) was carefully positioned in the 2MW Pawsey Supercomputing Centre with the upgrade already in mind. You'll see why on the next slide. The Cray supercomputing cabinets are designed in serial from a cooling perspective. On the left hand side you can see an air pre-conditioning unit on the end of the stack, followed by a thin red cabinet that hosts blowers, the larger open red door that houses a rack of blade servers (as does the next cabinet), before another fan unit (thin red door), and so forth.

The pre-conditioning unit controls the temperature of the air being sucked into the supercomputer on the off-chance there has been a heat event in the facility while the fans/blowers project that air onto the racks. The racks are in turn water-cooled by a 22-degree line of groundwater drawn up from an aquifer underneath the facility.

The final exhaust at the other end should - if all goes to plan - return air back into the data centre at neutral (the same temperature it came in at). Arguably, in cooler climes a machine like this could run in a data centre using free cooling and avoid the use of chillers altogether.

As it is Pawsey is saving millions on water and quite a bit on power, but they have still installed chillers in this room as a precaution. Perth is a pretty hot place, after all, and there are other machines in the same room that don't run quite as efficiently. 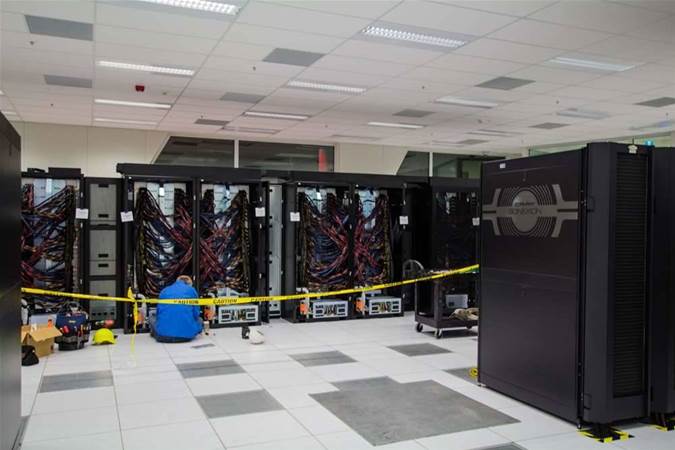 Here we see the networking going into the Cray XC30. Each of the 384 compute notes within every two-cabinet cluster can handle 10 GB of data per second simultaneously. That helps immensely when you are looking to break up large data processing jobs using parallelisation. 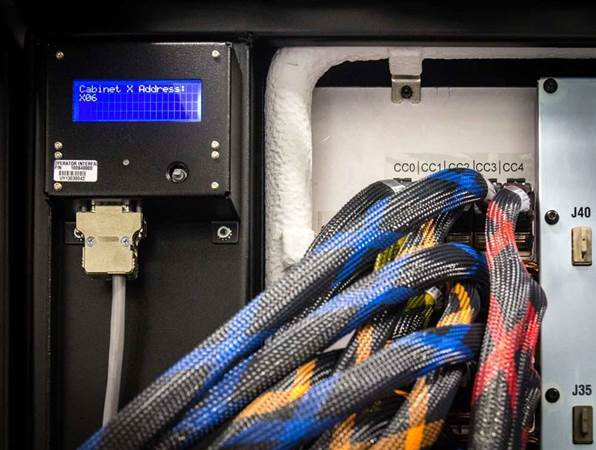 Within each cluster of paired units the primary form of connectivity is over copper, with optical fibre in use to connect each of these pairs to form Magnus. 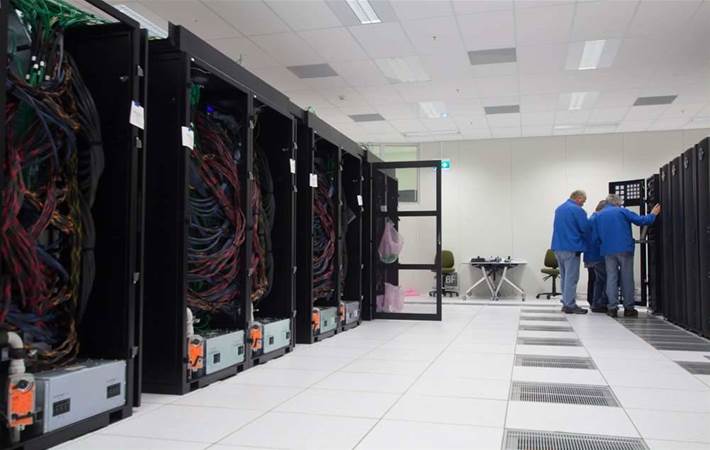 Day three of the install and networking is almost complete. 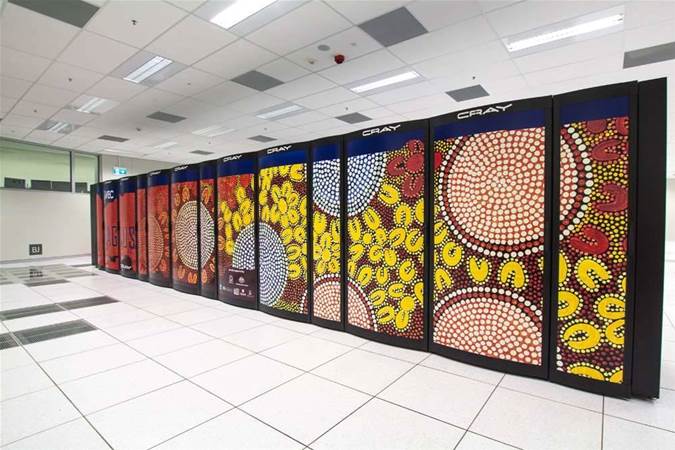 iVEC, the operators of the facility, commissioned indigenous artists to provide some atmosphere in the boardroom of the Pawsey supercomputing centre. With their permission, part of that artwork was adapted to give Magnus a stunning decal. It might not be the world's most powerful supercomputer, but it'd have to take the prize for best dressed.

The piece you can see here is based on the work of Wajarri woman Margaret Whitehurst. It pays tribute to two aspects of the north-west of Western Australia: the knowledge held by the earliest Australians about the stars in their sky; and two areas of science that iVEC supports most closely - geosciences and radio astronomy. 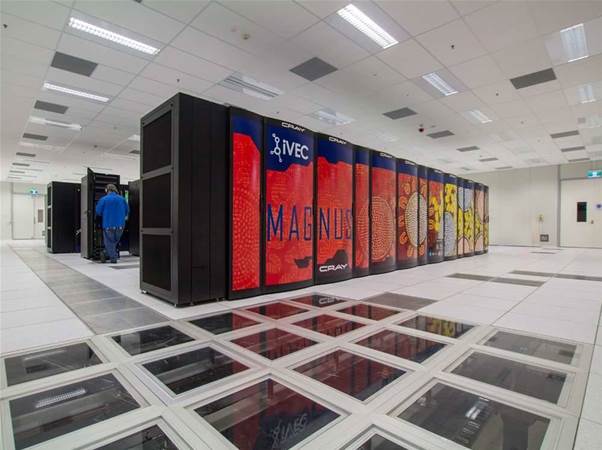 Here you can see the indigenous art blend with the pattern of a computing motherboard - which matches the exterior design of the Pawsey supercomputing centre. 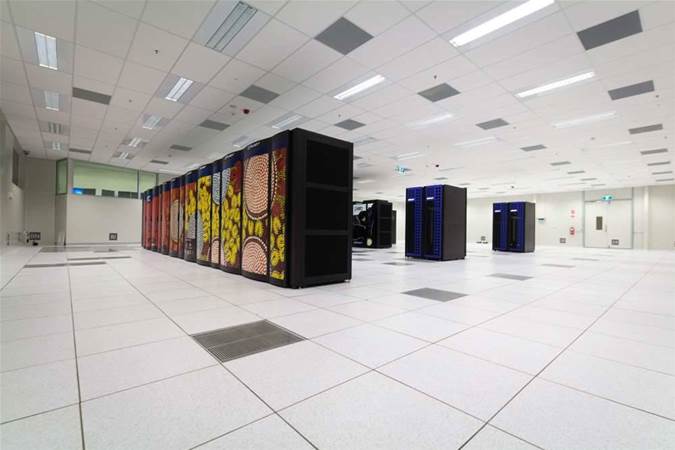 There she is! Magnus is expected to be operational by September and available for Australia's research community to tap into. Behind it you can see the Galaxy compute cluster used to process data from the Murchison Widefield Array radio telescope, which also features the artwork of Jesse Pickett.
We've done unboxing of smartphones, tablets, even servers before. But supercomputers? Welcome to the Pawsey Supercomputing Centre in Perth, Western Australia, where we watched the unboxing of a machine that might well break the record for the largest supercomputer in the Southern Hemisphere. (We won't know until its switched on!) 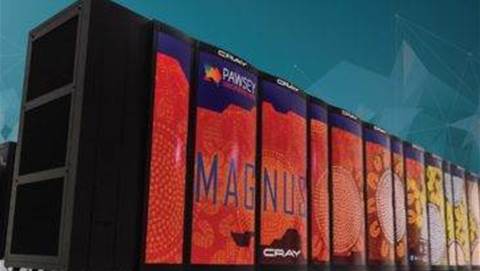 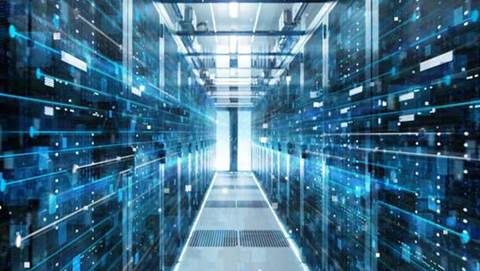