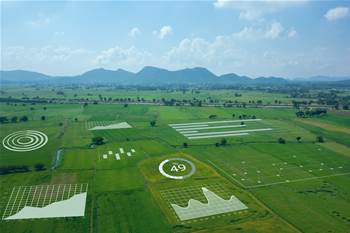 Ask an average person about Australian agriculture, and it may not be long before they talk about the quality of the meat and plants that come off the land.

Ask a farmer, and they might speak about the economic realities of farming, and of managing livestock, crops, land, and infrastructure.

Ask a data professional however, and they will give a different perspective – that every animal, plant, tractor, and even the soil on which they stand, can be represented by data. And when that data is gathered and put to work, incredible results can be achieved.

The potential benefits of data-driven agriculture are significant. As far back as 2016 the Australian Farm Institute’s report The Implications of Digital Agriculture and Big Data for Australian Agriculture found the use of digital agriculture to implement more intensive and data-driven farm management could produce gains of between 10 percent to 15 percent in cropping systems alone.

Benefits such as these are in the sights of CSIRO’s Digital Agriculture initiative through projects such as its grain industry forecasting platform Graincast, or its partnership with the commercial organisation Ceres Tag to improve the management of animals and land in the grazing sector.

Data can also play a vital role in establishing the provenance of agricultural products, including their biosecurity and sustainability credentials, and ensuring this knowledge is carried from paddock to plate.

But to date the uptake of data-driven practices across the Australian agricultural sector has been patchy at best.

“Everyone recognises the opportunity, but we haven’t created a holistic solution as to how to get there,” says Dave Henry, Research Leader for CSIROs Agriculture & Food Business Unit.

“We have demonstrated some value, but people are still questioning the tangible ways in which the sector can adopt and get value out of the technology.

“Data is great, but it is not actually useful until you can turn it into something the farmer can create an action from.”

The problem is not one of technology – Henry is certain we have plenty of that. Instead, he says the requirement is to apply digital technology in such a way that its benefits are irrefutable for all participants in the agricultural value chain.

“We are starting to see the whole ecosystem coming together to understand that we don’t just need more bespoke solutions, and that it is not hardware driven,” Henry says.

One recent development in digitalisation that may to have a significant impact on the sector is the coming together of nearly 30 organisations to create the Australian AgriFood Data Exchange.

According to the Head of AgriFood Tech and Circular Economy Advisory at KPMG Australia, Ben van Delden, the Exchange will enable the permissioned movement of data between agri-food industry participants.

This will deliver benefits in the form of centralised data for compliance and certification, tracking of biosecurity and contamination information, and traceability of supply and origin.

The Exchange has the support of industry groups such as Meat & Livestock Australia, along with various associations, government bodies, and research groups, including the CSIRO.

The project is being managed by KPMG under the watchful eye of former Australian Minister for Trade and Investment, the Honourable Andrew Robb AO, who has been appointed Independent Chairman, and a Steering Committee consisting of the Federal Government Department of Agriculture, Water and Environment, Meat & Livestock Australia, Food Innovation Australia Limited and Charles Sturt University.

Van Delden describes the project as ‘delivering critical IT infrastructure for the future of Australia’s agriculture and food sector’. He sees not only a strong potential commercial uplift should it prove successful, but also a significant danger for the sector should it not.

“What we are creating for Australia is an opportunity to be more competitive with export markets that are also trying to get their agri-food project into customer channels around the world,” van Delden says.

“This project is sponsored by nearly 30 organisations who have recognised that Australia has an aspiration to grow its agri-food exports to a market value beyond $100 billion. We are currently in our best year ever, which is forecast to reach just over $73 billion. So we have some way to go.

"This is one of the motivations behind Fisheries Research & Development Corporation, Victorian Government, Western Australian Government, CSIRO and Australian Wool Innovation investing in the delivery of the Australian AgriFood Data Exchange.

“What we need to make sure is that we are creating efficiency and enabling data to come all the way through the supply chain in a connected manner, to reinforce the claims around our product integrity and quality.”

This last point is critical, as according to van Delden, consumers around the world are becoming much more interested in the quality and suitability of the food they are consuming.

“Increasingly what we are up against is more mature destination markets that are looking to validate the sources of data that accompany the products with some degree of authenticity and specificity,” an Delden says. “They want to know precisely for that product what’s its journey has been.

“If other markets are served with this level of support to be able to connect the trust points along a supply chain, and we are not, then we are at a competitive disadvantage.”

CSIRO’s Henry agrees that bringing data into all points in the agriculture value chain will prove critical for winning business from today’s well-connected consumers.

“We are starting to see the solutions coming to play to address people’s willingness to actually contribute data,” Henry says.

“The other thing we are seeing is consumer pressure, and that is really important because it plays right back out to the source of food production.

“Consumers want food that is sustainably and ethically produced, and we are going to need systems to demonstrate that food is being produced in sustainable and ethical ways to address those consumer pressures.”

As a former Minister for Trade, Robb says he has long seen the importance of bringing greater data capabilities to agriculture, and specifically in tearing down the siloes that have prevented data sharing across different industries and territories.

His aspiration is for the Exchange is to unlock similar capabilities for data management and use within agriculture as the fin-techs have for the finance sector.

“In the 21st century, data is the lifeblood of any industry you can nominate.” Robb says. “When I look at agriculture, which I have been involved with for most of my life, the supply chain is massively underinvested from a data perspective compared with a lot of other industries.”

Aside from establishing provenance, Robb says opportunities will flow from potential efficiencies in the movement of goods thanks to the elimination of manual and paper-based processes that can delay the handoff of agri-food products from one party to another.

He says promotion of these opportunities and efficiencies will be important when building support for the Exchange.

“This thing has to be compelling,” Robb says. “It needs the support and trust of everyone along the chain, and the farmers in particular, because they can be a sceptical lot.”

This last point was demonstrated in a recent research report from CSIRO, Who will benefit from big data? Farmers’ perspective on willingness to share farm data, which surveyed 880 Australian farmers from broadacre agricultural sectors and found that only 34 percent regarded farmers as the primary beneficiary of aggregated agricultural data.

To seize the opportunities of sustainable agriculture through big data, farmers needed a reason to share data, and a higher level of trust between farmers and stakeholders, especially technology and service providers, needed to be established.

While van Delden acknowledges that the agribusiness industry is one of the oldest industries in the world and has been a relative laggard in terms of digital adoption, he believes farmers are showing a greater understanding of how digital technologies can benefit them.

“We have certainly seen quite a rapid rise in interest and participation in regional Australia around the use of sensors for capturing data,” van Delden says.

“We have also seen quite a strong increase in the level of integration with farm management systems and sensors that are both capturing data relating to crops and livestock.

“It is almost at that stage now where there is an accepted reality that the adoption of technologies is what’s required to gain advantage in this sector. As a consequence, there is more data available.”

The next stage of the project will be the completion of four ‘experiments’ which have brought together agri-business organisations and governments with technology providers (AxisTech, Erratos, Rezare Systems and Telstra/IBM consortium) to test different ideas.

“They will stand up those experiments between now and the end of March, and we will take the lessons out of those to inform an open market request-for-proposal process to stand up the technology infrastructure Australian AgriFood Data Exchange,” van Delden says.

“By the end of 2022 the financial business case will be completed, and we will be seeking investment off the back of that to deliver the initiative for Australia.”

According to Robb, initiatives such as the Exchange will prove vital if the Australian agri-food industry is to not only maintain its reputation for producing a high-quality product, but to also capitalise on that reputation in global markets.

“We have to improve and maintain and consolidate that perception across the board, so that we can pinpoint the premium markets and access them, secure them, and maintain them,” Robb says.