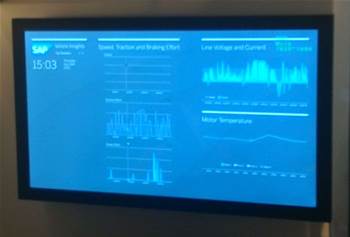 On-board train analytics on a Frecciarossa 1000.

But can the project be repeated worldwide?

A €50m ($73m) predictive maintenance project at the Italian state-owned Trenitalia train operator is emerging as SAP’s worldwide model for doing IoT on an industrial scale.

The German software maker’s challenge is convincing more businesses to take the plunge, but it is betting big on that front, last week committing €2bn over five years to the cause.

“We decided that we as a company would invest €2bn immediately and get behind IoT as the major growth story in the SAP journey because that’s what our customers need us to do,” CEO Bill McDermott told an SAP executive summit near Napoli.

“This is probably the biggest growth opportunity, not just for us but also for [our customers].

“It’s also something we need to focus on quickly because this is where [their] competitive advantage will be.”

McDermott – and SAP generally – is keen to take advantage of renewed interest and movement in the industrial sector around the convergence of information technology and operational technology domains, known by its acronym IT-OT.

Though vendors have talked up IT-OT for a decade or more, it’s only recently that businesses have begun to invest and make it happen. BHP Billiton, for example, has recently emerged as one of the largest local firms to adopt it.

SAP sees IoT and big data as the technological enablers for IT-OT.

“Imagine the worlds of OT and IT - what if they really come together?” SAP’s executive vice president for IoT Tanja Rueckert said.

“I know everyone [says] that they’re already together but right now they are two worlds. Bringing both worlds together – OT and IT – for all our customers, is my most important business project of my life.”

If Rueckert feels some pressure to lead a product business with the weight of a €2bn investment now behind it, she isn’t alone.

Executive sponsors of early adopter projects in the space are under similar strain to make good on the promise of IT-OT, IoT and big data to produce results and create tangible business value.

For that reason, Trenitalia’s €50m dynamic maintenance management system (DMMS) is a project to watch in the industrial space, and one that technology partner SAP is already holding up as a model for IoT and big data adoption.

DMMS is part of a larger umbrella project that aims to put the customer at the centre of Trenitalia’s operating model.

“We see the digital maintenance project as a part of a very important program for Trenitalia to transform the way we engage with the customer,” CIO Danilo Gismondi said.

“Maintenance is a very important process and a big part of this program. By increasing maintenance quality we can increase the comfort aboard and we can also give a better service to the customers.”

There are also cost savings if Trenitalia gets it right. The business case in part is predicated on achieving an 8-10 percent reduction in maintenance costs, a 5-8 percent increase in train availability, and an up to €20m reduction in penalties incurred for delayed rail services.

And so, like Rueckert, Gismondi is also under pressure to justify the investment in and early adoption of what remains an emerging technology.

“This is probably the most important project that I’ve ever done in my life,” Gismondi said.

“This is the truth because of the complexity of such a big project and also the expectations that we have [for it].

“It’s not only about the technology but also the change management; it’s the cultural shift that we want to introduce inside the company.

“Those elements are all very complex to manage, but particularly in a traditional industry like rail.”

Trenitalia spent a year scoping DMMS – a period Gismondi terms “software and platform discovery” – before taking the project to the board for sign-off.

The implementation is expected to be a three-year project that runs until the end of 2018.

Historically, maintenance operations are performed at fixed times, based on the length of time and distance a train has operated.

As a consequence, a “significant share of preventative maintenance activities are performed before they are actually required”, SAP and Trenitalia said in a presentation.

In addition, while trains have long had sensors, they traditionally log data and analyse it only after a train has completed its journey.

“The goal is to move from the traditional way we did maintenance to a new approach,” Gismondi said.

“We want to use big data in order to define and foresee possible damage to components on our rolling stock.”

By the end of the project, “around 4000 rolling stock” consisting of locomotives and coaches will be part of the DMMS.

Sensors fitted to the rolling stock will measure variables such as motor temperature, speed, traction, braking effort and line voltage.

Sensor data is aggregated on-board through a remote PC or similar interface and offloaded via a communication gateway, typically via wi-fi when a train arrives at a station or at the maintenance plant. Data is sent to a Trenitalia data centre, and loaded into SAP HANA and cloud systems and dashboards for real-time monitoring, analysis and drill-down.

The number and type of on-board sensors varies by train. Trenitalia’s newest Frecciarossa 1000 high-speed trains has between 500 and 1000 sensors on-board that are capable of generating up to 5000 data points per second.

“Already today, maintenance engineers are notified of anomalies in real time while a train is still in service so they are able to react immediately and plan all necessary operations in advance,” SAP and Trenitalia said.

“The ultimate vision is to perform all and only the required interventions at the right time.”

CTO Marco Caposciutti is careful to clarify that the project is not about performing “less maintenance, but better maintenance".

Trenitalia plans to measure its success using KPIs including the number and duration of maintenance interventions and by the number of substituted parts.

In future, Trenitalia plans to augment the on-board sensor networks with “diagnostic technologies” such as cameras.

“There are some parts of the train that are not possible to sense. For example the roof of the train or the body under the train,” Caposciutti said.

He said Trenitalia is working with two Italian universities and that the joint outputs would also feed into the DMMS.

Trenitalia did not provide numbers on how many trains have so far been connected to the DMMS.

Trenitalia’s focus on making its customers happy is rooted in long-term concerns for the viability of passenger rail services.

“The future is very challenging for us because day-by-day we are looking to a new era of mobility like Uber and Google cars,” Renato Mazzoncini, CEO of Trenitalia’s parent Ferrovie dello Stato Italiane said.

“This puts our company in the position of rethinking our business model. This is our really big challenge.

“Our passenger is a client of a world mobility system and we must satisfy their needs for mobility. Digitalisation is important to changing the customer experience.”

“We have to be better than others in giving a very good service to the customer,” she said.

“They have to choose us because we are better than other [options]. We can be reliable, comfortable and effective for their life.

“These are the key concepts which are driving this project.”

Ry Crozier travelled to the SAP Executive Summit as a guest of SAP.