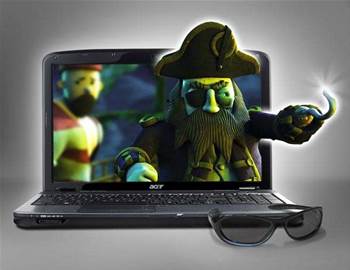 A lot of 3D movies have appeared on the big screen over the last year. Though some argue it's merely a gimmick, 3D is also now appearing on small screens - in this case, the Acer 5738DG 3D laptop.

The appeal of 3D might seem obvious. Who wouldn't want their spreadsheets and email to pop out of the screen in vibrant colour? Why have flat spam when adverts can enter the third dimension! The Acer Aspire 5738DG doesn't quite deliver that, perhaps thankfully.

It looks from the outside like any other 15.6in laptop. Shaped and built like many of Acer's past designs, the Aspire 5738DG won't break any new ground when it comes to design.

Design
Like the Acer Gemstone series, the 5738DG has a very familiar softened rectangular shape, glossy blue fingerprint-magnet top, black plastic bottom, and textured grey wrist pad. Build quality is decent but the plastic doesn't look as though it would take too much punishment.

Where the difference lies is with the 5738DG's 3D HD LCD. With a maximum resolution of 1366 x 768, it covers 720p HD and gives you the 3D feature when you wear polarised glasses. We were supplied with clip-on and spectacle versions.

Pull up the top and you'll find a massive full-size keyboard complete with number-pad available to you. Acer have opted for with a multi-gesture enabled touchpad that allows for two-finger operations like scroll and rotate.

Overall, the touchpad surface is smooth and is separated well, thanks to the textured wrist pad next to it, but the mouse buttons can be a little stiff. If you use them, there is a fingerprint scanner in the middle of the mouse buttons.

A DVD Super-Multi DL drive serves as your optical, but really it would have been nice to see Blu-ray and Firewire to make it a better multimedia experience.But it's really what's underneath that matters.

Not brilliant, but also not junk. The graphics hog known as Crysis only ran above 30fps on the lowest settings at 1024 x 768, which isn't very promising for demanding titles.Battery life wasn't outstanding either.

If you're planning on buying a laptop that handles 3D for light office work, you'll get a little over 3.5 hours out of it. But on our performance benchmarks with intensive settings, Acer's laptop will only let you get away with an hour and a half.

3D pictures - how good do they look?
Despite this, the bonus of having a 3D capable machine makes this laptop truly interesting. Sadly, the images never truly pop out of the screen, as most of the 3D found here is depth-based.

That is to say that when you watch a movie, look at a 3D image, or play some games through this setup, you'll almost always feel like the screen is a window and you're looking in on something that's actually going on.

To do this, you'll need the polarised glasses which thankfully come with the Acer Aspire. The glasses you get when you see 3D movies using Real-D 3D technology work quite well with the Acer Aspire 5738DG when viewed in the 3D modes. So there's your spare glasses worked out. Now you just need something to use them for.

This Aspire comes bundled with a program called TriDef 3D which acts as a sort of "3D front-end" letting you access movies, your DVDs converted to 3D, images, and games.

Movies can be played by either running movies made in 3D through the player or by letting TriDef "convert" your DVDs.

The latter is semi-3D, giving you that whole "gazing through a window" sort of feeling, while the former - running specially-made movies - provides proper 3D video.

Playing games is probably the most expected use of the 3D feature. TriDef 3D requires game profiles, and out of the box you'll find a decent selection of supported titles, including COD4, Half-Life 2, Portal, GRID, Crysis, Fallout 3, and others.

The bad side of this is that because the Aspire 5738DG only comes with an ATI Radeon 4570 and the 3D already uses extensive processing, your games won't run very well unless you turn your settings down.

It's sad too because the effect is quite cool when it works. It's why it's actually not such a bad thing that Acer didn't opt for a higher resolution screen.

Conclusion
Overall, the Acer Aspire 5738DG is an interesting machine. Right now, the 3D on it is more of a gimmick than anything else. As the tech gets better, I can see Acer leading from a product like this, but right now it's more of a gadget for early adopters.