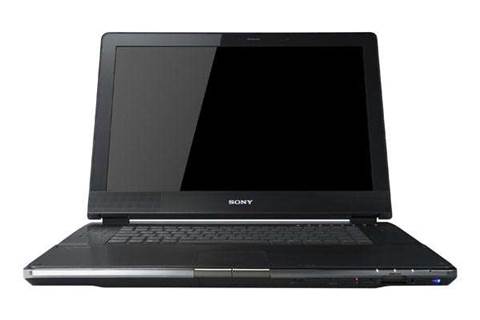 With the memory of HD DVD rapidly fading into obscurity, consumers can now buy into Blu-ray with confidence. And fresh from the format’s recent victory, Sony has also gone about refreshing its entire range of laptops with Intel’s latest Penryn 45nm processors.

Sony’s FZ range of laptops have impressed us in the past. This time, however, Sony has sent us the most expensive model in the range, the VGN-FZ38GU. The silver lid and VAIO logo looks classy, and the two-tone interior with the metallic strip along the keyboard’s top edge contrasts attractively with the black keys and wristrest.

Build quality is beyond reproach, too. That silvery lid feels strong and sturdy and, although twisting and prodding revealed some show-through on the display itself, it feels well up to the job of protecting the delicate panel. But while the lid is resilient, the base’s construction is positively bomb-proof.

The quality of construction pays dividends when it comes to ergonomics. The wedge design leans the keyboard towards the typing position and, while the Scrabble-tile keys may look unusual, operationally they’re spot on, with plenty of travel and a nice action.

Our only complaint relates to the VGN-FZ38GU’s physical design: the chassis’ square edges might look wonderfully crisp and neat, but we found them digging into our wrists after long periods of typing.

But this isn’t a business laptop with an eye on productivity; far from it – the VGN-FZ38GU is an entertainment laptop. The core spec is highly generous. One of the latest Intel Core 2 Duo T9400 processors (note, our review unit had the 100MHz slower, T8300) sits alongside 2GB of memory and a 300GB hard disk. With its two cores running at 2.4GHz, the Sony fired through our benchmarks with a score of 1.27 so expect the retail unit to be nudging 1.3.

Its gaming potential isn’t quite as awe-inspiring, however. The mid-range Nvidia GeForce 8600M GS isn’t one of the newest chipsets, managing 10fps in our least-demanding Crysis benchmark.

It’s still enough for older games, though, and has the bonus of easing the strain on the CPU when playing back Blu-ray movies. The sheer detail and quality of high-definition Blu-ray movies mean they require a fine display to look their best, and on paper the Sony’s looks a touch suspect. It’s a 15.4in panel, but its 1280 x 800 native resolution falls well short of the 1920 x 1080 high-definition resolution of Blu-ray movies.

It may therefore be incapable of revealing 1080p video in its full glory, but image quality is still impressive. Dual lamps make for incredible brightness and colours are reproduced with tremendous intensity. Our only concern is that our test photos revealed a noticeable red cast that often left skin tones and subtle shades looking a shade unnatural.

Fire up a Blu-ray disc, though, and any qualms about colour accuracy are soon banished. The panel handles motion well and, while not 1080p, it still manages to reveal a good amount of detail.

The upside of using a relatively compact 15.4in screen and chassis is that the Sony remains reasonably portable, especially when compared with the mammoth bulk of the likes of Acer’s Gemstone Blue 8920G (page 48). The 2.7kg weight is certainly manageable.

The only fly in the ointment is the Sony’s dreadful battery life. You’d hope that the 45nm Penryn processor might improve matters, but even when sitting idle the VGN-FZ38GU failed to last two-and-a-half hours. If you were hoping to watch Blu-ray movies on the train, with the extra CPU and graphics power required for the decoding you’ll need to purchase an extra battery to make it to the film’s conclusion.

The Sony VGN-FZ38GU might be a powerful, well-built laptop, but at $3399 it’s a massive investment and finds itself up against stiff competition. Acer’s 8920G is now available for over $500 less than the Sony, yet it has an 18.4in 1080p screen, a 320GB hard disk and better speakers.

Given that the Sony’s poor battery life reduces its portability, we’d have to go for the Acer. 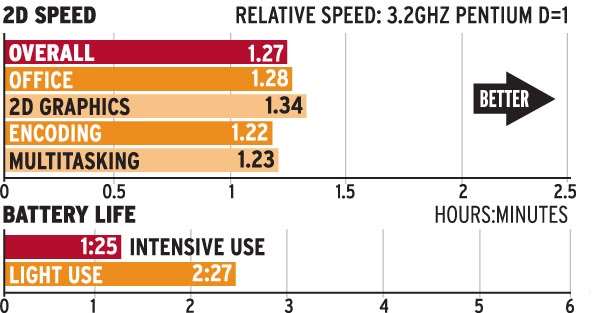