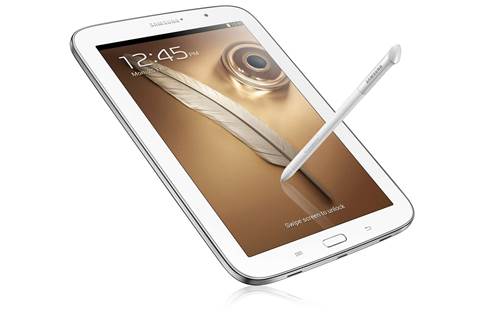 Tablet scribblers, this one's for you.

Samsung is riding high at the moment as the world’s number one Android mobile device maker, and you can see why the Korean company is doing so well when you take the Galaxy Note 8.0 out of its biodegradable bamboo packaging.

Our test device was the A$459 Wi-Fi only version (3G and LTE versions available later) which is nicely designed, slim, and fairly light-weight at 340 grams. It is built well and for some people, just the right size with its eight-inch (measured diagonally) screen and moderate dimensions.

If you think the Note 8.0 is too small or too big, Samsung has a plethora of touch devices with different screen sizes and varying capabilities and features, possibly at the expense of creating confusion as customers try to appreciate the difference between 5.8 and 6.3 inch displays.

The Note 8.0 takes its design cues from Samsung’s Galaxy phones, the S3 and S4: it looks like a much larger version of those devices, with light colours and similar plastic materials.

In the performance stakes, the Note 8.0 doesn’t pack quite as much processing prowess as its smaller smartphone cousins. Nevertheless, thanks to a quad-core processor that runs at 1.6GHz and with 2GB of RAM on board, the Note 8.0 was fast and never lagged.

Although the Note 8.0 screen is much larger than its smartphone counterparts, the resolution is lower at 1,280 by 800 pixels. This gives it a pixels-per-inch density of 189, whereas the S4 with its 1,920 by 1,080 full HD screen has 441, giving it that jaggie-free painted-on look.

Nevertheless, the screen on the Note 8.0 is nice and bright with great colours and for all ends and purposes, it’s perfectly usable. Videos and pictures both look great, ditto websites and games.

Adding to this is a great feature, the Reading Mode, that adjusts the brightness of the screen with the help of light sensors to reduce glare for use with e-books and long documents.

Two cameras are included, one front-facing at 1.3 megapixels and a rear mounted one with 5 megapixel resolution. Both are OK albeit not spectacularly good in terms of image quality. Still, the rear-facing camera does offer image stabilisation.

Despite a large, 4,600mAh battery, the Note 8.0 didn’t last all that long. You’ll easily get a day out of it, but with Wi-Fi (2.4 and 5GHz are both supported) and Bluetooth radios going the Note 8.0 needed a top-up from the charger each day. 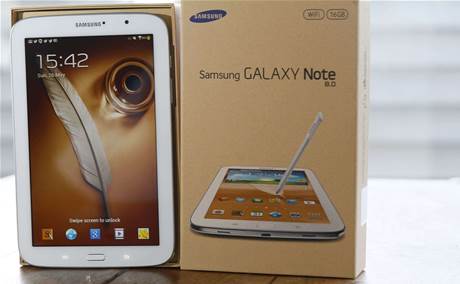 Pen up its sleeve

The Note 8.0 wouldn’t be a Samsung device if it didn’t have a slightly oddball feature and it doesn’t disappoint here with a pressure sensitive Wacom S Pen poked into the bottom of the tablet.

This works both as a stylus for moving screen elements around and interacting with them, and as a pen for writing. The handwriting recognition on the Note 8.0 has come a long way since Samsung’s earlier efforts but even then, it struggled with my squiggles unless I printed out each letter individually.

That says more about my handwriting, no doubt, than the tablet’s capabilities and the device should become better with more training – unfortunately iTNews had the Note 8.0 for a relatively short period of time so how much improvement a typical user will see is hard to tell.

The S-Pen does have one not so obvious advantage though: it stops the screen from getting finger-marked, which is reason enough to use it. In fact, with the Air View feature, you don’t even need to touch the screen with the S-Pen, as sensors detect when you hover over the display.

Does the S-Pen help productivity? That depends on what you do – if you draw and paint and do similar activities that require the higher degree of control over movement a stylus gives compared to fingers, then it may be worthwhile.

The Samsung S Note app that accompanies the pen makes it easy to create handwritten notes and other documents. Overall, pen/stylus support in tablets is a feature that awaits a “killer app”, something that takes it beyond scribbling and poking on the screen.

More useful is the Multi Window feature that lets you see and use two apps on-screen at the same time, easily sharing content between them. This is great for multi-tasking so expect to see it copied by other vendors soon. 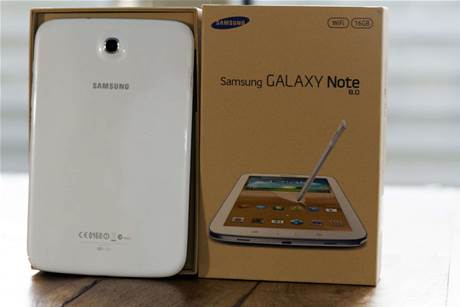 Preloaded to the gunwales

Samsung has squeezed in heaps of software with the Note 8.0, which has 16GB of built-in storage that is expandable with micro-SD cards to 64GB. There’s Flipboard, Awesome Note, productivity tools and more.

Even a remote control for TVs – yes, the Note 8.0 has an infrared transmitter too – is included and works well.

Samsung has dug deep into Android and added its TouchWiz user interface to the operating system, which is quite a departure from Google’s plain vanilla version. There are useful features such as the task switcher and the messaging apps, and the eye tracking that lets you scroll through documents as sensors keep, err, an eye on what you’re looking at.

At the same time, Samsung’s user interface designers are clearly a bit hyper, being overly fond of bright colours and annoying notification noises. Those mis-features are easy enough to sort out, however.

As with other Samsung devices, you get two app stores: one from Google and another one from the Korean company. It’s easy to see why Samsung would want to do this and there are some good and useful apps in there, but from a user perspective, one app store is ample. Besides, the Samsung App Store wants to update itself each time it starts up, which is bizarre in this time of cloud apps.

You don’t get the latest and greatest Android with the Note 8.0, but the older version 4.1.2 “Jellybean”.

A quick run with the X-Ray scanner didn’t pick up any vulnerability but for security, performance, features and software compatibility reasons, we’d prefer to see Android 4.2 on new devices, especially since it’s been out since last year.

While you get two more cores with the Note 8.0 and the S Pen, and generally slightly better specifications, the choice as always boils down to the camp in which you are when it comes to software: Apple or Google.

That said, if Android’s your tablet shtick, the Samsung Galaxy Note 8.0 is worth a look. The tablet is quick and works well and the S Pen’s a fun party trick that few other vendors can provide.