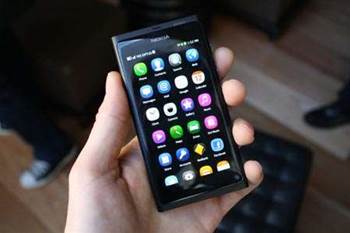 A glimpse at greatness finally arrives for Nokia, but is it too late?

Many readers will remember Nokia as a phone powerhouse, constantly innovating and always the mobile of choice.

Sadly, it’s been a while between vodkas for the Finnish once-giant and in the current world of smartphones, the company has suffered at the hands of both its rivals and itself.

So it’s an odd sensation using the Nokia N9, a handset that’s remarkably unlike anything Nokia has done in recent years. As its first (and probably only) MeeGo OS smartphone, the N9 is an impressive and accomplished device.

In terms of raw industrial design, it’s a superbly beautiful handset. The polycarbonate unibody feels fantastic, hitting 12.1mm at its thickest point and getting to just under 116.5mm long.

The 1GHz processor might seem underpowered when contrasted with other phones on the market, but it completed the SunSpider test in 3.695 seconds (compared to the A-Listed Galaxy SII’s 3.3seconds) and loaded the ABC home page in around 8.9 seconds. Not the fastest, but more than adequate.

Battery life was also impressive, with 29 percent remaining after our one-day tests – according to the N9 itself, this is enough for another full day of stand-by power.

Like the iPhone, the N9 has no slots for upgrading memory (it instead comes in 16GB or 64GB formats) and unusually it actually uses micro SIM cards. Finally, there’s even NFC functionality, although this is mainly used for device pairing and will not support transactions or payments.

One of the more unusual elements to the N9 is the “button lite” design - the only hardware buttons are the volume control and the power. Everything else is controlled via the touchscreen.

This is less difficult than it sounds thanks to the remarkably minimalist Harmattan “instance” of MeeGo that is the phone’s OS.

The N9 has only three screens: an Events screen that updates with notifications from email, messaging, social media etc; an Application screen where one can choose the desired app; and an Open Applications screen, which displays every currently running app. 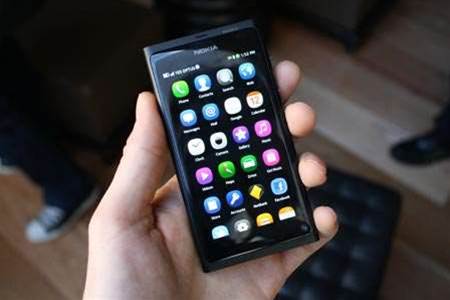 If it sounds a little less than intuitive, it is, but it’s also not difficult to adjust to. Closing or reopening apps from the Open Apps screen is simply a matter of tapping on one to bring it back to full screen or holding a finger down on the screen to open the option to close multiple applications.

There are no widgets, but there is an inbuilt weather application that runs off the Events screen.

All control within an application or screen is via the touchscreen. To move a running application to the Open Application screen you swipe upwards from the edge of the bezel.

To close the app directly swipe down, again from the edge of the bezel – this distinguishes it from a standard in-app finger swipe. It takes a little getting used to, but quickly feels natural.

Of course, for many, the judge of a phone is the quality and number of its apps. While there’s nothing wrong with the quality, the number of MeeGo apps is relatively small and unlikely to receive any significant boosts without more phones entering the OS ecosystem – and certainly Nokia’s high profile commitment to Windows Phone isn’t likely to help with this.

Similarly, the lack of removable battery and no SD port, combined with the relatively high price, will be a major turn off to many, especially Android users who have become accustomed to a certain degree of freedom in their devices.

Sadly, all of these elements stop us from fully recommending the N9 – despite our obvious enjoyment of it.

If anything, the overwhelming sense using the Nokia N9 is one of melancholy - why, oh why didn’t Nokia release something this good earlier? Why didn’t Nokia stick with this in favour of Windows Mobile?

This is a superb piece of hardware and the MeeGo/Harmattan OS is simple and elegant - but using it feels a little like watching your favourite actor’s final film before their untimely demise.