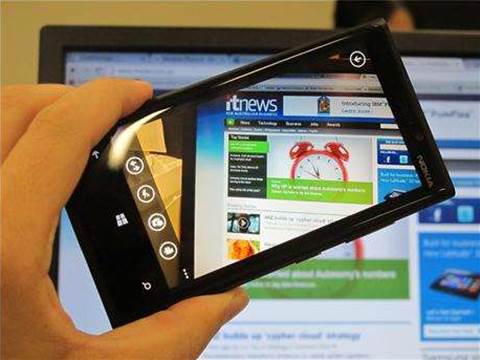 The Nokia Lumia 920 is the first smartphone to fly Microsoft's Windows Phone 8 banner in Australia.

The phone comes with an eclectic range of inbuilt features, ranging from superb photography and music capabilities to full versions of Microsoft Office and Outlook. This makes the Lumia 920 a solid choice for BYOD shoppers who require a device for work and/or play.

Like the Windows Phone operating system itself, the Lumia 920 boasts a refreshingly different look when compared to other smartphones on the market.

After reviewing a blur of Android devices, we were quite enamoured with the Lumia 920's colourful finish and retro oblong shape. The phone comes in a choice of black, white, red, yellow and grey.

As you'd expect from a flagship Lumia, the build quality is very solid. We were particularly impressed by the curved polycarbonate body which puts the plastic covers of most Androids to shame.

That said, we do have one minor design quibble: the micro-SIM card slot can only be accessed with an included 'door key' accessory. It's almost impossible to remove your SIM card without using this tiny tool which is very easy to lose.

The Lumia 920 is noticeably thicker and heavier than most high-end smartphones: it measures 70.8x130.3x10.7mm and weighs in at a hefty 185g. By contrast, the Samsung Galaxy S III measures 8.6mm at its thickest point and weighs 133g – despite having a larger 4.8in screen.

While its imposing size takes some getting used to, we found the Lumia 920 handled well during testing. The slightly curved body fits well into the hand with easy access to all major buttons.

Interestingly, Nokia has eschewed the recent trend towards 'button-free' phone interfaces: it even has a dedicated camera button which will be sure to please self-portrait fans (i.e. no more pushing blindly on the screen).

All in all, the Lumia 920's design is everything a flasgship smartphone should be; albeit on a bigger scale. If you can overlook this size issue, it's one of the best looking phones on the market.

The Nokia Lumia 920's impressive build quality extends to the 4.5in touch screen. On paper, its 332ppi pixel density trumps the iPhone 5's retina display, although you'd be hard pressed picking a winner in a side-by-side comparison.

Nevertheless, it remains one of the sharpest and brightest displays we've tested. Blacks are also exceptional, making this a great choice for movies on the go.

The Windows Phone 8 GUI is a significant departure from Android and iOS. The interface is highly customisable and boasts a large range of integrating apps.

The default home screen places a strong emphasis on personal connections, with detailed contact profiles taking center stage. The tiled interface can also be resized to suit the user's preference; a boon for people who prefer big, chunky icons. You can even change the colour scheme to match your phone's paint job.

The Nokia Lumia 920 has an incredibly smooth interface which makes scrolling and zooming a pleasure on the eye. We experienced no lag or crashes while multitasking between apps. Web pages and online videos also load very quickly, even when using a 3G connection.

Using the onscreen QWERTY keyboard is equally intuitive, with a satisying 'pop' accompanying your typing. It's not a patch on the raw speed of Swype, however.

The actual phone can often feel like an afterthought when it comes to modern smartphones, but we experienced no problems with the Nokia Lumia 920. Call quality held up well in relatively noisy environments, although you'll need to max out the volume in most situations.

As you've doubtlessly heard, ﻿Windows Phone 8 lacks many of the applications found at Google Play and the Apple Store.

While most of these apps are far from essential, there are some notable omissions, including popular business-friendly apps like Dropbox and Pocket/Read It Later.

On the plus side, Microsoft has attempted to fill the gap with some excellent first-party applications of its own, including integrated Skype, an Xbox Music subscription service and the aforementioned Office app which syncs with other devices.

In addition, Nokia has seen fit to include Nokia Maps and Nokia Drive which comes with free turn-by-turn navigation

That said, if you're migrating from an Android or iOS handset, it's extremely likely that some of your favourite apps will be a distant memory. Hopefully, this situation will begin to change as support for Windows Phone 8 grows.

The Lumia 920 comes with an 8.7-megapixel Nokia 'PureView' camera boasting a Carl Zeiss Tessar lens and an optical image stabiliser. It's easily one of the most advanced camera phones on the market and is capable of taking some impressive looking shots.

The camera's much-touted 'blur free photo' capabilities aren't just hype, with the inbuilt optical image stabiliser helping to keep ghosting to a minimum in all but the most energetic photos.

The phone also did a good job of taking bright and colourful photos in dim environments, which are typically the bane of smartphone cameras. While it's unlikely to completely replace your compact camera, the Lumia 920 is a reliable performer that trumps nearly every competitor.

On a down note, the shutter is slower to react than we would have liked, although this is offset by the Smart Shoot tool, which takes five pictures in quick succession. In addition to Smart Shoot, Nokia has included a range of digital filters and camera modes for creative users to dabble in.

Battery life is reasonable for a 4.5in smartphone -- heavy users can expect to get around 10-15 hours of use in-between charges. (Naturally, this can be extended if you avoid taxing applications and keep the WiFi switched off.)

The Nokia Lumia 920 is an attractive and user-friendly smartphone that boasts more than enough 'grunt' to compete with the cream of competing high-end handsets, including the Apple iPhone 5 and Samsung Galaxy S III.

However, the phone's chunky size will probably put some users off and its application library is dwarfed by Android and iOS.

Those caveats aside, the Lumia 920 represents a promising start to the Windows Phone 8 OS. It might just be the saving throw of the dice that Nokia needs.

The Nokia Lumia 920 is available exclusively from Telstra on a variety of business plans with prices starting at $65 per month over 24 months, which includes unlimited text and 1GB of data. It can also be purchased outright for $849.