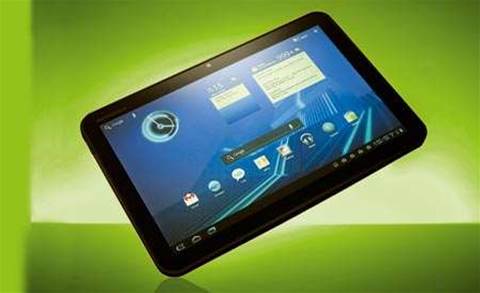 We’ve seen plenty of Android tablets in the past, but nothing that’s really managed to challenge the iPad. Hopes were high, however, for the Motorola Xoom – the first tablet to pack Android 3 (aka Honeycomb), complete with a new, tablet-specific interface.

It’s a handsome piece of hardware. The rear is mostly clad in grey aluminium, topped with a rubbery strip housing a five-megapixel camera, a dual-LED flash, stereo speakers and the power button.

Flip it around and the 10.1-inch 1280 x 800 screen dominates, with a two-megapixel, front-facing video camera top-centre. The volume buttons sit on the left-hand edge, with a headphone socket at the top and Micro HDMI, charging and dock contacts on the bottom along with a microSD slot.

Although the whole package is 129 grams heavier and 4.1 milimetres thicker than the iPad 2, it’s perfectly pleasant to hold.

Inside, the Xoom is powered by a dual-core 1GHz Nvidia Tegra 2 CPU, with 1GB of RAM and 32GB of integrated storage (16GB and 64GB versions may eventually become available).

It has Bluetooth 2.1 with EDR (supporting Bluetooth keyboards as well as audio devices), dual-band 802.11n Wi-Fi and A-GPS. There’s a 3G version coming too, available on various plans.

Android 3 is better suited to tablets than earlier versions of the OS: its icons are the right size for larger screens, allowing you to squeeze more onto the desktop than before.

There’s also now a thin toolbar along the bottom of all screens, with icons for Back, Home and Running tasks. A notifications area at the bottom-right displays battery life, Wi-Fi signal strength and a clock, with small icons indicating downloads and message alerts. 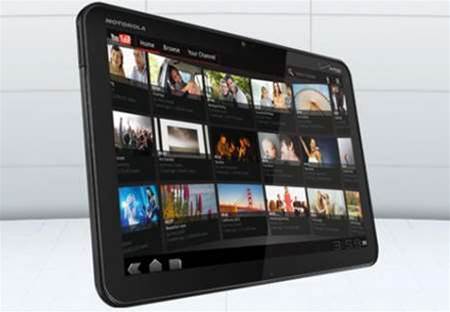 We like the Motorola Xoom, though the screen is a disappointment

The keyboard has been changed too, although not radically: some keys have been added and others moved to more standard positions. A hidden benefit is full multitouch support (four points in the case of the Xoom), so you can hold Shift and type capitals as you would on a physical keyboard. It’s at least as good as the iPad’s offering.

As with Android 2, the Xoom offers multiple customisable desktops, but you can still launch apps from the traditional grid view if you prefer.

The preinstalled applications have all received a tablet makeover: the email app, for example, is now split into panes, and the Calendar and Contacts app have been given a similar look and feel. The music player sports a CoverFlow-style interface for browsing through albums.

The browser has been beefed up too: you now get a toolbar and tabs along the top of the screen, and Incognito browsing. Thumb gesture shortcuts have been added and, of course, there’s support for Flash – although we had to download and install it ourselves.

As far as third-party software is concerned, the Xoom comes with a bare minimum. Beyond the core apps, the most interesting preinstalled software is Film Studio, a good-looking but rather basic competitor to iMovie on the iPad 2.

There’s no Facebook or Twitter integration as yet in Android 3, and no default eBook reader. We weren’t able to install Google Books from the Market, presumably because the Google Book Store isn’t yet available in Australia, and we couldn’t find an alternative that worked well with the Xoom’s large screen.

We’ll have to wait for developers to release HD versions of their apps, and hopefully for the Market interface to get an upgrade too – currently, there’s no way to sift tablet-specific apps from smartphone ones.

First impressions of the Xoom’s performance are positive. The 3D carousel animation you see when navigating between desktop screens is beautifully smooth and responsive.

You’ll be skipping around from app to app, to the homepage and back with just the sort of speed you’d hope for. It did well in our benchmarks too: the ABC homepage loaded in five seconds, and the SunSpider JavaScript benchmark completed in two seconds. The iPad 2, for all its buttery smoothness, can’t beat these scores.

Even battery life – a problem for previous Android tablets – is perfectly satisfactory. Motorola claims the Xoom gives ten hours of Wi-Fi browsing, and we wouldn’t argue: the Xoom lasted 12hrs 49mins in our video test, playing a low-resolution podcast video on loop at around one-third screen brightness until the battery died.

That’s a touch behind the first iPad (13hrs 44mins) and a long way behind the iPad 2’s result of 16hrs 49mins, but it will give you a good day or two of casual use.

Unfortunately for the Xoom, it isn’t all good news. Rotate the device from landscape to portrait and the desktop elements judder visibly as they move to their new positions. Open the main app screen and there’s a hesitation as it hovers into view.

Complex web pages can feel laggy and unresponsive: panning and zooming around the ABC homepage felt like wading through treacle.

Although it looks slightly smaller from the front, the Motorola Xoom is actually a few millimetres thicker than the iPad 2.

The screen is a disappointment too. This isn’t to say it’s a bad panel: it boasts vibrant colours, good contrast and decent viewing angles, with more pixels and a wider aspect ratio than the iPad 2, making it (in theory) better suited to watching movies on the go.

Sit it next to an iPad with the brightness on its IPS panel turned up, however, and the Xoom’s screen is nowhere near as bright or punchy. Colours look wan, and blacks aren’t as deep or dark.

The Xoom’s 5-megapixel rear camera produces larger photos than the iPad 2’s, with more features on offer, including twin LEDs for use as a stills flash or a video light. It will shoot 720p video and the 2-megapixel front camera is superior to the iPad’s.

In our test shots, however, we found the automatic white balance was all over the place, producing cold, bluish snaps under fluorescent office lights, while outside it tinged grey skies with a pinkish hue. The autofocus worked well and pictures looked sharp, but the unnatural colours are a problem.

With video, it’s a similar story. Footage looks less grainy than with the iPad 2, and in our low-light test, noise was more controlled. Colours, however, aren’t as rich or as well balanced. Overall, the Xoom’s camera is, like the iPad’s, distinctly mediocre.

Despite these gripes, we like the Motorola Xoom. It’s well made, the hardware is powerful and battery life is good.

Before you rush out and buy one, though, we’d urge you to pause and consider a couple of things. First, the price is a little high. In numerous areas – the screen, the apps and the slick performance – this tablet lags behind the iPad 2, yet it costs exactly the same amount.

Second, for all that’s good about the Xoom, it isn’t the only Android 3-enabled tablet around. Asus’ 16GB Transformer, for example, is cheaper, boasts a better screen and is slightly slicker in use.

For those reasons, even if you’re desperate to buy an Android tablet, we’d advise you to hold onto your cash for the time being and see what the next few months bring. The Motorola Xoom ups the ante, without a doubt, but it isn’t everything that we’d been wishing for.