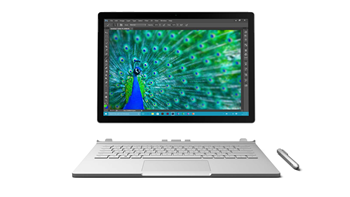 Redmond's attempt at creating hardware that shows off Win10 largely successful, but not entirely.

Microsoft under Satya Nadella has started to find its cool: open source, cloud, mobility (well, not quite, until there's a Lumia phone that sells well), and the nicely designed Surface range of portable computers.

The company's latest hardware effort reflects this refocus. The Surface Book portable computer is an attempt at giving Microsoft customers the same end-to-end experience that Apple users get.

It's being positioned as a direct competitor to Apple's hardware, but how well does it fare?

You're not going to feel embarrassed in the executive meeting or the frequent flyer lounge with the Surface Book. It looks good, and is well made out of premium materials: this is no ugly corporate PC.

It's clear the Microsoft product team have put a lot of thought into the design of the Surface Book to make it user friendly and practical.

One example: using high-powered portable PCs in your lap can be a painful experience when the device heats up. To solve that, Microsoft put the cooling vents on the side of the display to expel heat away from users' sensitive body parts.

Even the device's "dynamic fulcrum hinge" is different, with a futuristic design that flexes as it opens and closes the display.

Microsoft ships the device with the Surface Pen, which has received a makeover compared to earlier versions: it can now can sense 4096 levels of pressure, up from 256, and has a magnet to attach to the side of the display.

The Surface Pen works well, especially in apps like Microsoft OneNote for drawing, writing and selecting objects on the screen, with a clickable top button and replaceable nibs. It does miss out on being tiltable like the Apple Pencil for the iPad Pro, which is handy for shading and filling areas in drawings. 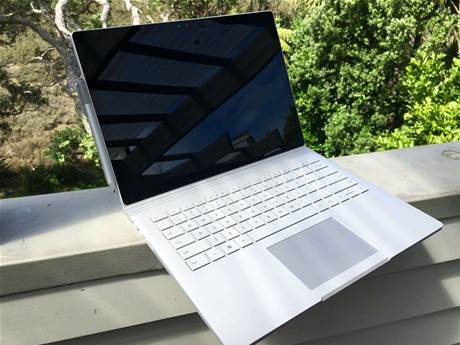 Windows 10 introduced new user authentication technologies, and while the Surface Book doesn't have a fingerprint reader, the Windows Hello facial recognition authentication feature uses the 5 megapixel front camera (there's an 8MP imager at the rear) and is fast and easy to use.

Because Microsoft wants the Surface Book to be a jack of all trades, it has several ports: two USB 3.0, one Mini DisplayPort and an SD memory card reader.

… but not without issues.

A quick glance at the Surface Book might lead you think Microsoft decided to build a portable laptop that does one thing well, namely being a laptop, and won't attempt to recreate that unhappy marriage of desktop and touchscreen computing that turned people off Windows 8.1.

In fact, Microsoft bills the Surface Book as "the ultimate laptop".

However, the Surface Book is another take on Microsoft's dream of creating the ultimate "laplet" or "tabtop", following the earlier Surface models with thin, detachable keyboards.

You can use the Surface Book as tablet: just press a button on the keyboard (or click an icon in Windows 10) and the operating system releases the display latches and restarts the apps.

(The reason you need to press a button is because there's a graphics card in the keyboard. Windows apps would crash if they can't find the graphics card, and need to be switched over to the one in the Intel processor instead when the tablet bit is detached.)

The whole thing works quite well, and you can even set it up with the keyboard and display facing opposite directions, which could come in handy for presentations with a small number of people.

Another plus is that the keyboard balances the display/tablet unit, making it feel less top heavy than a normal Surface and there's no chance of the combo separating from one another accidentally.

Detached from the keyboard, the tablet keeps going for around three hours. The batteries in each part of the Surface Book can be charged separately.

In practice though, the split laplet personality of the Surface Book has some drawbacks. The device is quite heavy at just over 1.5kg, and that cool-looking hinge leaves a gap between the keyboard and the display, making the Surface Book bulkier than it perhaps should be. 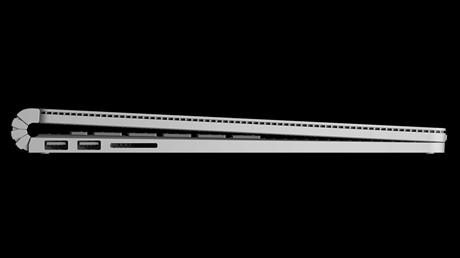 Just as with a normal clamshell laptop, you're stuck with the keyboard on the Surface Book and can't use a third-party option. This reviewer found the spongy feel of the Surface Book input device less than optimal, but it's highly subjective.

The mouse/trackpad worked well though, as good as its equivalent on Apple devices.

One irritant for right-handed people is that the pen will only attach to the southpaw side of the Surface Book. On the Surface Pro 4, the pen's magnet sticks to both sides of the device.

Additionally, in tablet-mode, you can't access USB devices or a memory card in the SD reader.

Overall though, the Surface Book hardware is a good match for Windows 10.

My review machine came fully loaded with a dual-core Intel Core i7 6600U hyperthreaded processor that can run at up to 2.8GHz, 16 gigabytes of system memory and a 512GB Samsung SSD that stored 477GB after formatting.

There's also a separate Nvidia "Maxwell" graphics processor to help push pixels around faster than the embedded GPU in the Intel processor for apps that demand it.

In other words, more than enough to run Windows 10 very quickly. The 13.5-inch PixelSense display has very high resolution, 3000 by 2000 pixels, but the graphics hardware in the Surface Book can keep up quite easily.

Windows 10 also scales the desktop and window elements of the user interface properly at 200 percent. I tried at 1:1 scaling, but it's not really usable as everything on the screen is tiny.

GeekBench 3 rated the single core processor score at 3480 and the multicore equivalent at 7165. This is quicker than the iPad Pro, which managed 3220 and 5442 in the single and multicore tests respectively, but a comparison between the two is difficult due to different processor architectures and Windows 10 and Apple iOS 9.1 being very dissimilar in how people use them: Windows 10 for instance allows full file system access, but iOS 9.1 doesn't.

You won't be disappointed with the performance of the Surface Book in the vast majority of scenarios.

You will, however, pay a premium for the tablet/laptop functionality: my $4199 review unit is a good chunk'o'change. You could buy a top of the range 13-inch MacBook Pro with similar specs as the Surface Book and have change left for an iPad mini 4 as a companion tablet.

Staying on the Microsoft side of the fence, the Surface Pro 4 top dog model has the same 512GB sized storage, 16GB RAM, is lighter, has a Core i7 processor but a slightly lower resolution PixelSense screen and no secondary graphics card - it costs $3580 with the Type keyboard cover, and runs Windows 10 just fine.

If you don't want to spend over four grand but still want the Surface Book, the range starts with a Core i5 model that has 8GB RAM and 128GB storage, costing $2299. While the processor and memory amount should be enough for Windows 10, you miss out on the Nvidia graphics card and 128GB storage could be tight.

If you're going to spend that kind of money, another $900 for the top of the range Surface Book buys better value overall.

The high price of the Surface Book will, unfortunately, limit the appeal of the device.

It's a good notebook but it's not clear that the tablet functionality - which is only adequate, with no case and short battery life - adds enough functionality to be worth the premium over standard clamshell laptops.