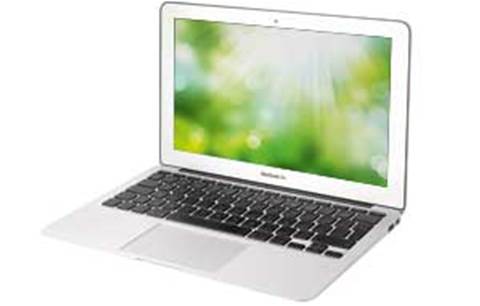 Apple's ultraportable squeezes just enough power and longevity from the skinniest of chassis.

The MacBook Air 11in is an ultraportable that weighs a single kilogram and tapers to a front edge just 3.1mm thick. But it's so many other things too.

It's the nearest Apple has come to creating a netbook. It's the obvious destination for Apple's desktop app store. And it's fast enough to be more than a second laptop – just.

The silver aluminium unibody is familiar, with the famous logo beaming your allegiance to the crowd – and rest assured you'll draw one. Thankfully, it's rock solid. Even when closed it's just 18mm at its thickest point (including feet), yet the lid has almost no bend in it, and the base is immaculate. Even the tiny hinge feels like it will last, which is quite a feat.

The 1366 x 768 resolution is as we'd expect at the 11.6in size, but the glossy coating and saturated colours make it every bit the equal of its peers. Wall-E was full of colour, the details never less than sharp; most tellingly, side by side with a netbook, the extra inch-and-a-half and higher resolution make a monumental difference, yet it doesn't feel like you've stepped up in size or bulk.

The black Scrabble-tile keyboard stretches across the full width of the base, and has room for a big right-Shift key. The shrunken cursor keys and a slightly thin Enter take some adapting to, but otherwise it offers a very comfortable typing experience. The travel is just right, and the backing is rigid to prevent any annoying bounce as you type.

We're less fond of the touchpad, the whole of which clicks, but that's a matter of personal preference. Apple disables tap-to-click by default, but enabling it had us back up to speed. At least in OS X and in Windows via Boot Camp you can configure it to your habits.

There's little else to embellish the minimal design. It has a USB 2 port on either flank, along with a headphone socket and a mini-DisplayPort output – ready for those expensive DVI or HDMI adapters. The absence of an Ethernet port may irk some, but it's balanced by dual-band 802.11n Wi-Fi.

The real interest lies in just how Apple has managed to keep the MacBook Air 11in so skinny. For starters, it uses flash storage. On test here is the 128GB model, but you can also opt for the 64GB version for a cheaper $1199. The latter seems a little tight for comfort if you intend to dual-boot OS X and Windows, but that's the only difference between the two models.

They use a surprising choice of processor: the 1.4GHz Intel Core 2 Duo SU9400 is more than two years old, but compare its 10W TDP to the 18W of the most efficient Core i3, and it makes some sense (although this is an area where AMD's new APUs will have an impact). With 2GB of DDR3, it managed 0.70 in our benchmarks . Nevertheless, that's enough power for all the tasks most people will throw at it.

In fact, you can throw more at it than you might imagine. With an Nvidia GeForce 320M discrete chip inside, the MacBook Air eased through our Crysis test at native resolution, averaging 36fps at Low quality settings. Full HD MKVs played smoothly, as did 720p clips on YouTube. It even managed a little video editing, smoothly previewing three HD clips simultaneously in CyberLink PowerDirector. While we wouldn't recommend the Air to enthusiasts, it can do a perfectly good job with home movies.

Given its dimensions and power, we were a touch disappointed with 5hrs 7mins of light-use battery life. To be fair, that's in Windows 7; it lasts closer to seven hours in OS X, and that isn't bad given the lack of any obvious battery bulge. It's non-removable, as always.

No doubt, you looked straight at the price and immediately reached a conclusion. But we can't overstate how good the MacBook Air 11in is. It isn't a Sony VAIO YB. It isn't a netbook.

Yet somehow it just about outdoes both: it's a carry-everywhere companion that's so accomplished at everyday tasks it could end up replacing your main PC.

Apple's ultraportable squeezes just enough power and longevity from the skinniest of chassis.