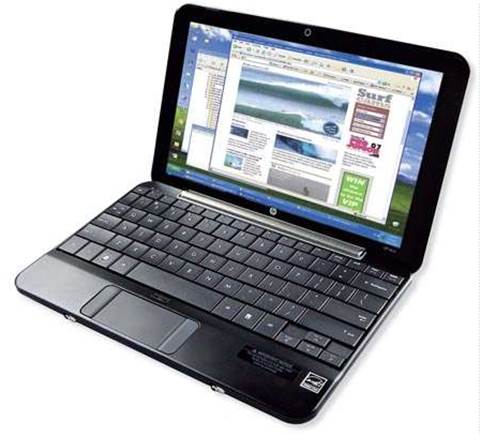 Stylish, sophisticated and super-portable: this is the netbook you’ll have to hide from your friends.

The HP Mini 2133 was one of the most stylish not-quite-netbooks we saw last year. It was one of the few that looked like a real notebook, but at the time we bemoaned the inclusion of Vista.

So it’s pleasing to note that the new Mini includes XP Home as the installed operating system. Microsoft’s XP licensing deal means that as a result the RAM in the Mini 1001TU is reduced to 1GB, rather than the 2133’s 2GB, but XP with 1GB performs better than Vista with 2GB, as our recent RAM performance tests showed.

While we benchmark all the netbooks and notebooks that come through our labs, we’ve found amazing consistency for the Atom N270 processor. Even so, the HP Mini rates on the higher side of performance.

It’s score of 0.41 is better than the other nbetbooks we’ve seen bearing this processor – The Eee PC 901 scored .39, for example, and the Wind 0.38. But it’s not in performance that the HP Mini stands out.

Instead, it’s style and usability where HP has focused its efforts. The lid has a silver spiraling pattern across the piano black surface, making it the most attractive netbook we’ve seen.

The Mini-note 2133 had a beautifully stylish silver keyboard, and the only way in which the 1000 is inferior is in colour – the keys are matt black rather than lush silver, which looks cheaper, but comfort doesn’t come with a silver finish and this keyboard is as intuitive, spacious and easy to use as the 2133.

Not only that, but it’s 90% the size of a full sized keyboard, with full-sized keys and there are no odd key placements to throw your usual typing rhythm off-kilter.

The trackpad, as with the Acer Aspire One, features the left and right click buttons on either side. Here though, the HP starts to show its class – not only is the trackpad itself larger, but the buttons are more than twice the size, and considerably less stiff to use.

On the Aspire One, navigating was most easily managed with two hands, but the HP makes it comfortable to use one-handed. The trackpad also includes a scroll function.

The screen is an impressive 1024x600 widescreen, with good contrast through shades of grey and detail, and excellent clarity. It compares favourably with the screen of the high end DV5 (see page 60), and performed exceptionally in our tests.

The Mini also comes with a few additional features that don’t go astray on a netbook: webcamera, two USB ports, 802.11 b/g and Bluetooth.

With the good points out of the way, we can address the less fabulous aspects.
First of those is the battery life – the Mini 1001TU managed 2hrs 13mins for our intensive use battery test, which features a slew of applications pushing the netbook to its limits.

On light use, where the laptop does not much more than look pretty with its screen at half-brightness, it managed barely an hour more, managing 3hrs and 1 minute. It’s as expected for a 3-cell battery on a laptop with this configuration, but the battery’s placement at the base of the unit means it’s unlikely you can upgrade to a 4- or 6-cell version later.

Additionally, the price is steep for the performance and feature combination – you can get the Eee PC 1000H for around $100 less, with a larger hard drive and draft-n wireless to boot. Not only that, but the 1000H has considerably more battery life – from 4-6 hours in our tests, compared to the 2-3 hours for the Mini 1001TU.

Given that the Eee PC 1000H is the one of the more expensive netbooks, the Mini 1001TU’s specifications look a bit lightweight in comparison. That doesn’t take away from its selling point: the usability is fantastic, and the excellent design and performance makes this one netbook you’ll be wanting to show off. We’re only too happy to recommend it.