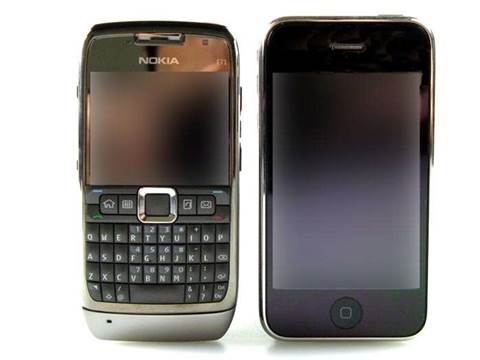 One of the best combinations of design and function in a smartphone we've seen for some time.

The iPhone may have taken the lion's share of smartphone hype, but frankly, if it's mobile email and calendar and not Web browsing that you want, we'd wager some might be better off steering on the direction of either the BlackBerry Bold, Palm Treo Pro, or this pocket rocket - the Nokia E71.

To give you a better idea of the size of the Nokia E71, we've created this photo gallery (click the pics above), comparing it side by side with the iPhone 3G, Palm Treo Pro, and Nokia N95.

As you can see in the photos, the E71 is very slim. It's similarly sized to the iPhone 3G, coming in a mere 127g verse 133g for the iPhone. The E71 is also on par with newly-arrived QWERTY rival the Palm Treo Pro (it's actually a tad slimmer). It's taller and wider than the non-QWERTY n95, but side by side it's drastically slimmer.

The E71 first came to our attention in July (see our E71 story here)- we were taken with the no-nonsense combo of the QWERTY keyboard and S60 interface. Now we’ve had a chance to play with the E71 some more, and we're still impressed.

Lose the touchscreen, add QWERTY
Above all other features, this is the prime reason the Nokia E71 is a standout device. Many of the smartphones we've seen have suffered from a poor combination of clunky touchscreen interfaces (thought the iPhone's is a class act), or bulky QWERTY form factors. The phone was either too big, or the menu system was a nightmare.

The Nokia E71 nails both problems, with a QWERTY form factor that is actually quite a bit slimmer (though wider) than some consumer-grade phones.

Comparing the E71's Symbian OS with Windows Mobile is like comparing apples and oranges - each have their advantages. Still, there's no doubt Symbian is an excellent alternative for those stepping up from a consumer phone.

More grunt under the hood
While our review unit had some initial teething issues, taking an eternity to startup out of the box, performance quickly improved. Compared with some of the competition, the E71 is fast, switching menus quickly and mostly without lag.

This isn't the case with other top-end Nokia phones we've tested, including the brilliant 6220 Classic and n95, both of which had noticeable lag after pressing menu buttons.

One for the email/calendar crowd
In the end, whether the E71 suits you comes back to what you need your phone for. There are smartphones for multimedia (n96/n96/iPhone), Web browsing (iPhone), mobile TV (Samsung U900T), and phones for email (BlackBerry Bold/Treo Pro/E71).

On the surface, the E71 falls into the business category, but it's really a good choice for anyone that wants proper mobile email and calendaring, and QWERTY, without the extra fluff like touchscreens and Mobile TV.

After the stream of phones that do mobile TV and music, it's refreshing to see a device concentrate solely on email, and do it so well.

Is it a Blackberry killer?
With IMAP and Exchange Active Sync improving across the board in phones like the E71, you'd have to say the BlackBerry is no longer the sole killer email device on the market.

Whether Nokia and others can dislodge BlackBerry's solid reputation is another matter - the BlackBerry's unlimited data and the slick email system is still the gold standard. Still, the E71 is about the best alternative we've seen yet. It will be interesting to see how the mobile email space looks in a year's time from now.

After the stream of phones that do mobile TV and music, it's refreshing to see a device concentrate solely on email, and do it so well.