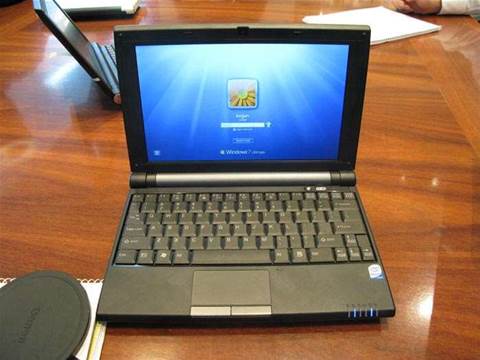 It resembles the excellent MSI Wind, but the inclusion of Linux-based gOS operating system makes this one super-cheap piece of hardware

Ruslan Kogan (the same Kogan behind the $900 KEVIN37 TV, and a yet-to-be-released Google Android phone) came into the PC Authority offices today to show us pre-production models of the Kogan Agora Netbook.

The samples are the culmination of a consumer-driven design process, and he showed off 3-cell and 6-cell models, running gOS and Windows 7, in both black and white.

The final version will be come in black only, however.

Both models will include the Intel Atom N270 processor seen in most netbooks, 160GB HDD, 3 USB ports, 10/100 Ethernet, 1.3mp web camera, 10.2in 1024x600 screen and a 4-in-1 card reader.
There's a slot behind the battery for a 3G sim, but the Agora doesn't currently have the hardware to support 3G. It's something that will be looked at for later models, depending on the success of the Agora.

We get our hands on the Agora

Our first impressions are good.

The 10.2in screen is enclosed within a 12in chassis, allowing for a good size keyboard. It's about 92% of fullsize - the same as the HP mini 2140 - and we found typing on it was responsive and comfortable, with no badly placed keys to throw us off-stride.

The 1024 x 600 screen looks crisp and bright, and the trackpad is well sized and functional.
Styling will be slightly different in the final version, using a pattern, rather than the swoosh line pictured here.

The styling of the gOS interface is very reminiscent of Mac OS X - especially the Dock - and it comes preloaded with Skype, OpenOffice, Firefox and a swag of Google Apps. Because gOS is based on Ubuntu, it's compatible with all Ubuntu apps, too, making it both user-friendly and flexible. The Ubuntu file manager also makes it easy to add additional applications in a manner not unlike the Android Market or iPhone apps store.

gOS loading times are quite good for the applications we tried, OpenOffice opened from the dock in about 30 seconds, and it was responsive for all other apps we checked.

We should get our hands on the final version in the next few weeks - products are shipping from early April - so we'll put it through our benchmarks then and give a full run down of its pros and cons.

The big difference between the Kogan Agora and almost any other netbook available in Australia right now is the price, and the choice of operating system. The two go hand in hand, but that means the success of the Agora depends how much people are willing to trade off the almighty dollar for an unfamiliar interface.

It's likely that the Agora will find a home with those looking predominantly for hardware. Anyone who already has a retail box or student license of Windows XP, for example, will find an unbundled netbook a tempting proposition.