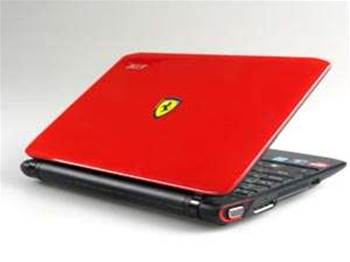 Does Acer's Ferrari One 200 netbook put too much emphasis on style or is there some substance as well?

Acer's Ferrari line of mobile products has always occupied a distinct niche. For the vast majority of people the word Ferrari is synonymous with speed. One of the great luxury brands of the modern era, the trademark Ferrari red color almost defines the concept of performance at a price.

The big question is always whether Acer can deliver high performance on a product line restricted to using AMD processors.

This is why the $999 Ferrari One 200 netbook seems so incongruous to us in the PC Authority labs. Like previous Ferrari products, it uses an AMD-based hardware platform. In this case it is built around a Athlon Neo 64 X2 (L310) mobile processor with an integrated ATI Radeon HD 3200 graphics chip. This is basically notebook hardware in a netbook form factor, making it a rarity in the sea of Intel Atom based netbooks. If anything this means that Acer is unfettered by Intel's strict guidelines for netbooks, making for a product that is impressively featured.

The Ferrari One 200 has 4GB of RAM and a 500GB hard disk - both significantly larger than expected. It also runs Windows 7 Ultimate, which in our opinion is overkill on a netbook (and likely adds to the price). In terms of connectivity it has bluetooth, WiFi, gigabit ethernet, a 5 in one card reader and 3 USB ports. The stereo speakers on the front of the netbook use Dolby virtual surround sound to beef up audio (especially the engine roars that replace the default system sounds).

This all combines to make the Ferrari a potentially great performer. The hardware should be sufficient for HD video playback, and the 500GB hard disk may only be 5400rpm but provides capacity well above the 160GB size that is the current standard on netbooks.

There are several aspects to the Ferrari One's design that make it stand out from the pack - most notably the bright red lid emblazoned with the Ferrari logo.

Under the lid lie other nods to the car manufacturer. The plastic palm rest is stamped with a faux-carbon fiber pattern and there is liberal use of red highlights around the netbook (there is even a function key that takes the user directly to the Ferrari website). Unfortunately the relentlessly plastic nature of the construction makes the netbook feel more like a toy car than something inspired by the pinnacle of automotive engineering.

There is cause to worry that functionality has taken a back seat to aesthetics. The keyboard sports full sized keys for the most part (although the inverted T design of the cursor keys leaves a lot to be desired). However Acer has given over the rear of the chassis to the six-cell battery and screen hinge. This means that the keyboard sits in the middle of the netbook, rather than being set back near the screen. In turn the touchpad and buttons sit right at the near side of the netbook.

While there is never a huge amount of space to rest one's palms while typing on netbooks, this design seems to force an even worse position. And for large-handed users like this reviewer it makes typing an uncomfortable experience (which is a shame because the keyboard is otherwise great for fat-fingered typing).

We are intrigued to see how well the specs of the Ferrari One 200 translate to real world performance. While it won't have the gaming power expected from the Alienware M11x that we looked at recently, it should be a robust performer for office use and media playback. Combine this with the large hard disk and this could well be an indispensable piece of portable computing. As long as you like your computing to be bright red.