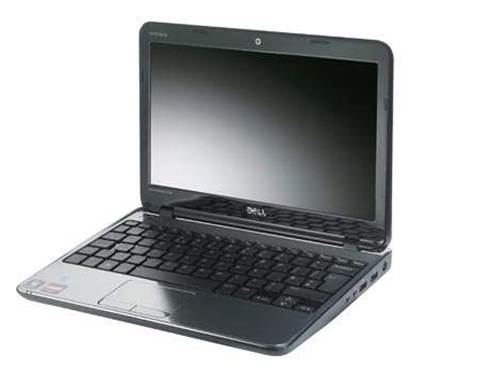 Dell is spreading its attractive Adamo ultraportable class right down the price scale with the latest addition to its Inspiron range, the petite M101z.

First impressions are excellent. Many 11.6in portables look or feel cheap and insubstantial, but not the M101z. Our review model came with the striking Tomato Red lid, one of four colour options for the M101z, and it looks fantastic. It does a great job of livening up proceedings – you can also opt for black, blue or pink – and the interior oozes understated class. Chrome-effect plastic stretches around the Scrabble-tile keyboard, and gloss-black surrounds the display and pools between the dainty, rounded keys.

These good-looks are backed up by strong build quality too. Yanking the chassis with all our might revealed barely any flex, while the lid – a common weak point of dainty ultraportables – proved reassuringly solid. Considering this laptop weighs only 1.56kg, Dell has done a great job.

For once, it isn’t a low-powered Intel processor at the heart; instead, AMD’s Vision platform takes charge. The top-end model on test has a dual-core 1.3GHz Athlon II Neo K325 processor, but those on a tighter budget can opt for one of the single-core Athlon Neo configurations.

The K325 helped the M101z along to a fine 0.67 in our benchmarks – just a few per cent slower than laptops we’ve seen with Intel’s latest low-power chips – while the ATI graphics powered ahead. The Radeon HD 4225 eased through 1080p HD videos and even managed an average of 13fps in Crysis at 1366x768 and Low detail settings. It isn’t much, but at lower settings it’s a start.

Dell’s choice of an AMD-based platform does have its downsides. The first area to suffer is battery life: while 6hrs 34mins of light usage is good enough, it doesn’t compete with the best rivals bearing the Intel brand. Noise, too, is an ever-present blight. Although there’s no sign of the heat dissipation issues we experienced with Lenovo’s AMD-powered ThinkPad X100e, the M101z’s whiny fan spins up with disappointing regularity to put you off your work.

That’s the worst of the M101z’s traits, though, as elsewhere it doesn’t put a foot wrong. The keyboard is perhaps not quite the match of the business-centric X100e, but it’s still excellent. The wide channels between each key make for simple, error-free typing – even in the cramped confines of a commuter train – and the short, crisp action of every key feels great under the finger.

The mushy trackpad buttons fall short of similar levels of perfection, but the individual buttons mark a welcome respite from the current fad of having a single rocker button, and the smooth finish of the pad itself makes for trouble-free use.

Our only genuine qualm is that the M101z, for all its positive points, is a little on the pricey side at $854. The A-Listed MSI Wind 200 might not be able to rival it for build quality or graphical oomph, but it’s some way cheaper.

Still, if the price is really that off-putting, you can save a fair bit of cash by opting for one of the less generous configurations on offer. Drop down to 2GB of memory, a single core Athlon II Neo K125 and a 320GB hard disk, and you can pick up an Inspiron M101z for a much more reasonable $699. It might be up against some tough competition in the value laptop category, but the Dell Inspiron M101z is pretty, practical and portable, and more than deserving of a recommendation.