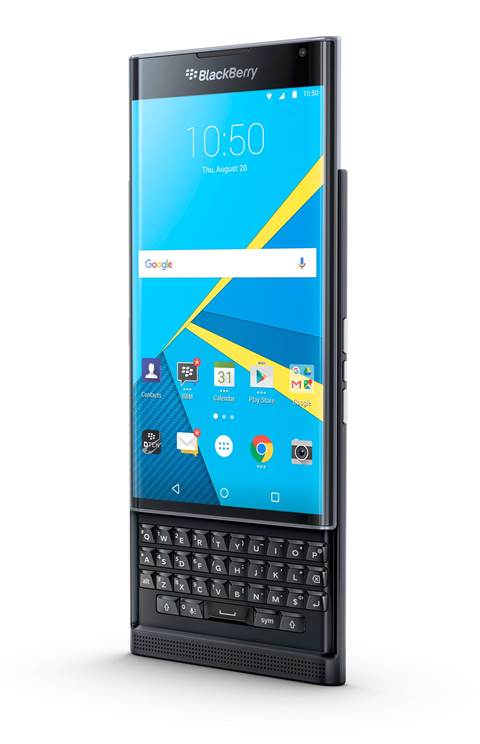 The Priv with its slide-out physical keyboard.

An Android smartphone with extra security.

After years of clinging to the hope that BBOS would make a comeback, BlackBerry has finally admitted defeat and released a smartphone running the Android operation system. The good news? It could be just the boost the company needs.

The Priv is clearly designed to combine BlackBerry’s traditional strengths with a premium Android smartphone, featuring a slide-out physical keyboard and apps like BlackBerry Hub.

It also offers a number of additional security and privacy enhancements – hence the name, which BlackBerry says is short for privacy.

With fond memories of classic BlackBerries, I was looking forward to trying the Priv’s physical keyboard. The slide-out mechanism ensures the keyboard is easy to access. It’s useful for long emails and other instances where it’s handy to view the full screen, and it has some nice touches, such as the keyboard doubling as large trackpad.

However, I actually later found myself using BlackBerry’s excellent virtual keyboard exclusively. The virtual keys are significantly larger than the physical keys and, for me, easier to use.

With the addition of the keyboard, the Priv is quite bulky, weighing 192g, although in the hand it feels comfortable and not overly heavy.

The Priv currently ships with Android 5.1.1, although BlackBerry is promising an Android 6.0 update over the next few months. The phone offers a relatively clean Android skin that has a few nice extras, such as pop-up widgets, which allow you to swipe up or down across an icon to reveal associated widgets.

The Productivity Tab is another useful addition. It sits unobtrusively on the right curved edge (although you can change it to the left edge if you prefer - the screen has curved left and right edges, similar to the Samsung Galaxy Edge) and, when swiped, provides quick access to your latest emails, appointments, tasks and favourite contacts.

The company has also committed itself to monthly security patches. Full-disk encryption is turned on by default, and ‘integrity detection’ monitors the device for configuration changes and other potentially compromising events.

An app called DTEK identifies how secure your device is, and provides quick access to Android settings to improve your security ‘rating’. DTEK’s app controls are particularly useful, showing if and when an app has accessed the location, microphone, camera and personal information – and you can even set it to notify you every time an app does this.

The Priv features 3GB of RAM, 32GB of flash storage and a microSD slot for additional storage. The Qualcomm Snapdragon 808 is a high-end processor, but no longer one of the fastest. As a result, its performance is reasonably good rather than outstanding. In our benchmark tests, it beat the aging Sony Xperia Z3, but fell well short of the Samsung Galaxy S6.

Most notably, however, the Priv includes a big 3410mAh Lithium Ion battery, and that was reflected in our battery life tests – it trounced the S6 and even pipped the long-lasting Z3. Under normal use, the phone comfortably lasted a day on one charge.

The Priv’s 18-megapixel rear camera has an optical image stabiliser and can record 4K video at 30fps, though you’ll get much better results at 1080p. It produced some excellent stills, but its low-light snaps didn’t match those from the best phone cameras, and its shutter speed was a little sluggish at times.

Its 5.4-inch AMOLED display is vibrant and sharp, and the 2560x1440-pixel resolution is on par with the very best phones.

Loyal BlackBerry fans may lament the exclusion of the BlackBerry OS, but familiar apps like BlackBerry Hub and the ability to access a much larger range of apps from the Google Play store should more than make up for that change.

The Priv is currently only available from Optus. With plans starting at $67 a month, it’s priced similarly to premium phones like the Samsung Galaxy S7 and Apple iPhone 6s.

And while the Priv is a very good smartphone, it doesn’t quite match the best phones. The S7, for example, offers a much better performance and features such as water resistance.

However, the Priv has the edge in security, making it an attractive option for privacy-conscious users. And with advanced threats increasingly targeting mobile devices to breach corporate networks, the Priv is also likely to interest enterprises.

Whether that translates to a significant sales increase is another thing.

With BlackBerry’s global market share having plummeted from 19.9 percent in 2009 to just 0.2 percent, according to Gartner, the Priv may be BlackBerry’s last chance of regaining at least some success in the smartphone market.

BlackBerry Enterprise Server (BES) is, of course, the centrepiece of the company’s software line-up, offering a secure management solution for iOS, Android, Windows and BlackBerry mobile devices. The latest version, BES12, is available as a traditional server product or a cloud service.

Further building its software portfolio, BlackBerry has acquired several companies over the past two years. They include Secusmart, for encrypted voice and text messaging; Movirtu, for its ability to add multiple phone numbers to a device; WatchDox, for its secure file-sync-and-share solutions; AtHoc, for its secure crisis alert system; and Good Technology, for its app container technology.

Indeed, the company looks to be close to achieving its ambitious aim of doubling software revenue this financial year, having reached US$364 million for the first three quarters.

Still, BlackBerry has a long way to go to get back to the financial success of its halcyon days.

Even moderate success with the Priv would be a much needed fillip for the company, and round out its end-to-end mobility and security portfolio.