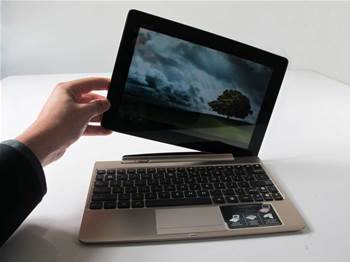 In the past couple of years, Asus has carved out a respectable niche for itself in the laptop/tablet 'hybrid' market.

Plenty of other tablet manufacturers offer keyboard accessories as an optional extra but none have integrated the two as successfully as the ubiquitous Transformer range, which is currently up to its sixth iteration (seventh if you count the Asus Padfone).

The latest member of this rapidly expanding family is the Transformer Pad Infinity – a 10.1-inch laptop-tablet hybrid that boasts some significant improvements over its predecessor, including a full HD LED backlit touch screen and Android 4.0 (Ice Cream Sandwich).

With an RRP of $999, the Asus Transformer Pad Infinity is prohibitively expensive for what is essentially a secondary laptop device. We're still not completely sold on the idea of an Android-powered laptop either (the OS is naturally more suited to tablets and smartphones).

That said, if you're looking for a two-in-one mobile device with an impressive battery life, the Infinity remains one of the best options on the market.

With dimensions of 263x181x10mm, the Transformer Pad Infinity tablet is a smidge thicker than its predecessor, which measured 8.5mm at its thickest point.

It's also a few grams heavier (598g vs 586g). But this isn't something you're likely to notice: it's still lightweight enough to carry in a slim briefcase or tucked under your arm while roaming about.

The Pad Infinity uses the same keyboard dock as the Prime. Then as now, we were impressed by the keyboard's excellent build quality.

For some users, the miniaturised keys may take some getting used to (especially if you've been spoilt by the current crop of ultrabooks) but they remain pleasantly tactile to the touch.

In tablet mode, the Pad Infinity behaves as an Android Ice Cream tablet should: screen transitions are silky smooth, which makes navigating between apps and menus a breeze. Likewise, the touch screen is highly responsive with none of the UI quirks that can mar cheaper tablets.

Asus has also seen fit to throw in a handful of widgets which run the gamut from Weather to Battery Manager. While there's nothing here that will change your life, the inclusion is a nice touch.

To re-insert the tablet into the keyboard dock, you need to line up the connectors with the keyboard's hinge slot. It feels a bit fiddly at first, but quickly becomes second nature.

All in all, the Asus Transformer Pad Infinity is a very well constructed device that has style to spare. We're still not entirely sure it's worth $999 (for the same price you can get a 64GB iPad, official wireless keyboard and a handful of accessories), but at least it looks suitably pricey.

The Transformer Pad Infinity's biggest selling point is probably its Corning Gorilla Glass 2 touch screen. Unlike the Asus Transformer Prime, which made do with a 1280x800 display, the Infinity sports a proper Full HD Super IPS+ panel with a native resolution of 1920×1200 pixels and a brightness level of 600 nits.

The result is a vastly superior viewing experience that trumps nearly every other tablet on the market. It's particularly well suited to 1080p video playback and HD gaming, making the Pad Infinity a solid entertainment device.

Like every other tablet on the market, the Transformer Pad Infinity's screen suffers from highly visible fingerprints which are never a good look. Asus has included a cleaning cloth in the sales package to remedy any unsightly smudges.

The Transformer Pad Infinity is powered by a Nvidia Tegra 3 1.6GHz quad-core processor which boasts a nominal 'fifth' core for low-intensity applications.

Other notable specifications include 1GB of DDR3 RAM, 64GB of internal storage, an 8MP rear-facing camera, a pair of beefy SonicMaster stereo speakers and an impressive array of connectivity options (USB 2.0, micro HDMI, an SD and Micro-SD Card Reader and a two-in-one audio jack) Wireless connectivity is provided via 802.11b/g/n and Bluetooth 2.1.

In Quadrant, which is a CPU, I/O and 3D graphics benchmark test designed specifically for Android devices, the Infinity Pad scored 4241, which places it above the Asus Transformer Prime TF201. Google's Nexus 7 tablet also came in below the Pad Infinity, with a total Quadrant score of 3586.

The Asus Transformer Pad Infinity has one of the best tablet cameras we've tested. When used outdoors in sunny environments, its output is supurb, putting the likes of the Nexus 7 and Galaxy Tab 10.1 to shame.

The camera uses the same user interface as the other ICS tablets on the market: the photo capture button is located to the right of the screen within easy reach of the thumb. Other popular functions, such as colour filters, white balance, scene modes and an 8x digital zoom are just a quick fingertap away.

We remain fans of the way the camera app handles, with the 10-inch display providing an excellent view of subjects and surrounding scenery.  Of course, it remains somewhat debatable as to whether tablets require a rear-facing camera, but at least it's there if you need it.

Another area where the Infinity excells is battery life. The Tegra 3 has been specifically optimised to offer the best of both worlds, providing a beefy performer with plenty of staying power.

When used by itself, the tablet provides around six to seven hours of continuous video playback, which is one of the best results we've seen from a 10-inch tablet. This is boosted significantly when attached to the keyboad dock which contains its own 19.5Wh Li-polymer battery.

We've been using the Transformer Pad Infinity on-and-off for over a week and the battery is still going strong off its first charge.

The Asus Transformer Pad Infinity is an impressive performer that provides the functionality of a laptop with the convenience of a tablet device. If you're willing to overlook the price tag, there's a lot here to like.