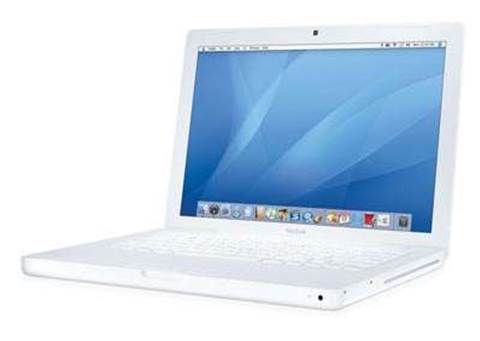 The cheapest way to get OS X, but it has all of the MacBook Pro’s shortcomings and more of its own

Next to the swish aluminium casing of the MacBook Pro, the plain old MacBook, in anonymous white plastic, looks rather drab. And while it isn't exactly flimsy, it's tangibly less robust than its pricier sibling: we wouldn't like to risk dropping it.

Internally, though, the MacBook is fairly well equipped. Its 2.13GHz Core 2 Duo P7450 processor helped it achieve a benchmark score of 1.07 - fast enough for most typical uses.

With an Nvidia 9400M GPU, gaming performance isn't bad either. In our low-detail Crysis test, the MacBook achieved a respectable 27fps.

Predictably, the MacBook has its shortcomings. The 160GB hard disk is small by modern standards, and while 2GB of RAM is a decent starting point for Mac OS X and Vista, it's less than other manufacturers offer - and there's no free DIMM socket for upgrades.

The 13.3in, 1280 x 800 screen feels a little cramped too, and colour reproduction is merely satisfactory. You can add some zest by tweaking the "digital vibrance" in the graphics driver, but you won't achieve the sort of depth that other notebooks (including the MacBook Pro) deliver out of the box.

Plus, if you want to connect an external monitor, you'll have to shell out for an adapter to make use of Apple's awkward mini-DisplayPort. It's a disappointment, especially when you consider the marketing emphasis Apple places on graphical aesthetics.

Unlike some Apple products, the MacBook does offer a replaceable battery, and we love the push-button capacity gauge. But in our tests it yielded a mediocre 3hrs 21mins in light use, reducing to an hour and a half under heavy use (you can expect five hours of life under Mac OS X). There's no sort of memory card reader either.

Still, the MacBook does have one thing over most of its rivals: it will run Mac OS X. If that's what you want, this is the cheapest way to do so, and for light domestic use it will probably do so perfectly satisfactorily.

Compare it to Windows-based laptops in the same price range, though, and it's clearly below par in several areas.