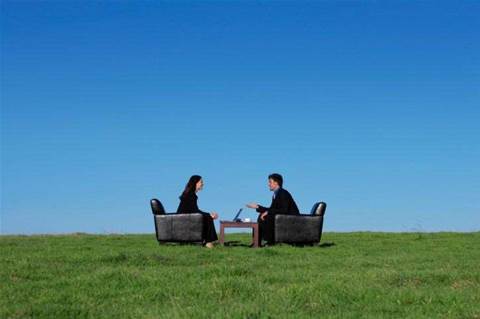 Bill Hilf, the man in charge of Microsoft's strategy for living in harmony with Linux lays out the company's opportunities with open source and the open source business model.

Since coming to Microsoft from IBM in 2003, Hilf has been inextricably involved with Microsoft's strategy for dealing with Linux. He's recently been appointed general manager of Windows Server marketing and platform strategy, which means he's taking on an expanded role, but open source is still one of his core issues.

Years ago, Microsoft had a very specific interpretation of what open source is. Open source and Linux were sort of synonymous and it was sort of a specter-like ghost. A lot of what I've done over the past four years is help to parse out two issues: Where do we cooperate and where's the value for our company in participating, and where specifically do we compete head-to-head and make sure there's no grayness around that?

We compete specifically with things like Red Hat Enterprise Linux. The software that goes into Red Hat Enterprise Linux, we may or may not compete with at a feature level, but the real value of open source from Microsoft is understanding how community developed software can happen on our platform and help grow our business as well as the open source community, which is how we started off on this whole path of launching things like Port25 and CodePlex, and which is why I submitted the licenses to the OSI.

Are there any specific areas where you would see Microsoft placing things in an open source development environment as a way to further its own products or to better interoperate with things?

When people buy commercial software, really what they're buying is a guarantee. You're buying a guarantee that what you have will perform, and has been tested and there's someone you can call up, and if things go really bad someone's liable if something doesn't work. You're buying this ecosystem of accountability. One of the challenges of open source and really the challenge with the open source business model is: it's hard to replicate that ecosystem of accountability and that guarantee.

The first question that I ask, because I'm deeply involved with that decision chain is, what does this do to help or hinder that ecosystem of accountability, the testing model, the support model, the backstop? That has to be a counterbalance to any value that we might get out of a community software development model, and those are decisions that we kind of walk through.

Red Hat's been really the only proof that somebody can provide an overlay support service, and even then, I don't know that it's even that significant of a proof. The community itself is the value of open source, not any one vendor who's participating in it. I think a lot of people get lost in the software, the source code part of it. What we've been doing strategically is try to figure out how do we participate in that community as a good citizen so that we're in that sort of same value chain. We did the same thing at IBM. There's lots of participation of IBM in open source, but there's very little shared source code between IBM's shipping products and open source software.

In order to participate in communities like that, how do you cut through the muddle of the Richard Stallmans of the world and overcome the popular resistance, and also cut through the resistance that you've gotten from people like Red Hat who you might want to partner with?

We just had a bunch of our global account managers in with us, people who handle our super big customers, and they said, these customers don't even know who Richard Stallman is, they don't even care. They've chosen Linux or Apache or open source in general because of a few simple reasons: either price, or functionality, they want a more modular system or they want something that has a smaller footprint, there are certain needs that they have that are satisfied by that type of software.

Turning to the product that we're releasing, we said what do people really like about Linux servers, what do they really like about Unix servers? They like having a modular system that has a small footprint. They like having a great command line environment that allows a power user to do a lot of scripting and command line things that are not UI-based. That's what we built Windows Server 2008 with Server Core and PowerShell and new technologies that support PHP better in IIS 7 (Internet Information Services). For us, it's not a religion, there's literally feature requests from customers showing up in some of our competitive products, we said great, people want this stuff.

Do you guys talk to the guys who are working on Samba at all?

Yeah, I mean, I've known Samba creator Tridge (Andrew Tridgell) and top Samba contributor Jeremy Allison for many years and we have been and continue to be in active conversations with them on lots of things.

But you haven't done anything deeply, you're not going to announce anything, partnerships, etcetera, at least publicly, right now?

Not publicly right now. We're certainly, from all the activities in the EU, we've been -- they're obviously a principle project in open source related to interoperability, if not the premier open source interoperability project. So we've been talking very, very actively with them about what to do and how to do it, and things to improve things, and we're not announcing things, but I'll just say there's very, very positive conversations going on right now from both sides, and I think Jeremy would attest to that. We're still working through some issues, but it's in a very positive light.

Anything closer, have you been talking to Red Hat any further?

I'm not aware of anything that we're -- I mean, we still touch base with them every now and then, but I don't think there's anything specific that we've done.

I'm curious as to where do these patent claims come from? Microsoft has said there's X numbers of patents that Linux may infringe. Where does that intellectual property come from? Is it based on ownership of Xenix back in the day, is it based on things that are currently in Windows?

We published a patent map, which shows, literally, we listed out every number and we listed out every category it fits in and we published that so everyone can see it, because everybody kept asking us, well, what are the patents? (Note: a Microsoft spokesman later clarified Hilf was referring to a categorized tally of possibly infringed patents published earlier this year in a Fortune article, not a detailed list of every specific patent, which Microsoft declined to provide.)

Classically, our preferred plan is to license our technology in a very proactive and productive way versus litigate. So what we try to do is say in a very, very nice way, there's a model here that allows us to be essentially paid some degree for our inventions in a way that says at least for all the money we invest, the $7 billion every year in research, there's a way to see some return on that if someone's using our technology.

Right now what we've been trying to establish with one to another from Novell to Linspire to Xandros, Turbolinux, a way to license technology so that's both cost effective and makes sense for us so we're protecting inventions that we have and move forward. It allows us to move forward and take that issue off the plate, versus have a rat hole of litigation nightmares and lawsuits.

There are companies or organisations you've reached out to and they say no, we wouldn't like to do anything. If you talk about infringement there, but if you don't do anything, isn't that weakening your claim to hold valid patents?

Would or could we ever litigate, yeah, sure, it's always an option. But it's the last option in the decision tree for us. Would we have to enforce it? Possibly yes.

The key to that is to separate, people's, individuals' and groups' belief about software patents as an issue and then what is the current way that we do patent law in at least the United States. You may disagree with it, but there's a law for how we deal with patents. They often get wrapped up together as the same issue, but they're not the same.

As a company, we're hyperactively involved with patent reform and trying to find models that work best for the industry. But it is key, as you have these conversations, particularly with the open source community, keep in the back of your mind, what is the current model for doing business, right, wrong or indifferent, and then what is the opinion about software patents as an issue.