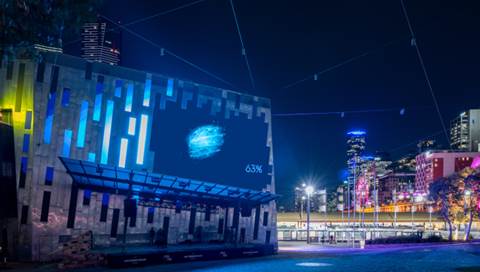 Australian-based NFT Disconnected will be touring several east coast locations over the next month in a bid to highlight the internet disparity across the globe.

Disconnected is a one-of-one, dynamic, evolving NFT artwork that leverages United Nations datasets to track global internet connectivity rates. Disconnected will evolve over time, continuing to grow as more and more people are connected to the internet.

Luke Millanta, creator of Disconnected told Digital Nation Australia that Disconnected is made up of 100 different artworks.

“Disconnected then evolves and changes to show these different works based on the percentage of global internet users. As such, while the artwork is comprised of so many different works, you will only see one at a time,” he explained.

Deemed a human rights issue by the UN in 2016, the pop-up digital installation aims to shed light on the fact that 37 percent of the world’s population have never used the internet, cutting them off from key medical information, education and social connectivity.

Henrietta Fore, UNICEF executive director said in a recent UNICEF report, “Lack of connectivity doesn’t just limit children and young people’s ability to connect online. It prevents them from competing in the modern economy. It isolates them from the world.”

After discovering that 37 percent of the world’s population does not have access to the internet, Millanta decided to raise awareness of this issue.

“I then decided I wanted to spread awareness of this and, given my love for emerging technologies and the hype around NFTs, thought a digital artwork would be sadly poetic,” he explained.

Millanta said this project has been created not only to raise awareness but to allow the Australian public to pause and reflect on the privilege that is virtual connectivity.

He said, “After years of physical separation due to Covid the internet has never been more important in keeping people connected.”

Millanta has experience in the NFT space as he currently serves as an advisor to a few NFT gaming companies.

He said, “However this is my first time in the trenches making my own [NFT]. I decided I wanted to start with something different that I hope people will both enjoy and learn from.”

Disconnected will kick off its national tour in the heart of Melbourne, at Federation Square. The piece will then travel to both Commonwealth Place in Canberra and Martin Place in Sydney.

Millanta holds a Guinness World Record for having the world’s largest following on the game publishing platform Steam, where he publishes custom game content to an audience of millions.

Disconnected is supported by the Royal Art Society of New South Wales and will be showcased at several locations including Melbourne on 24-26 June, Canberra on 1-3 July and Sydney on 4-6 July.