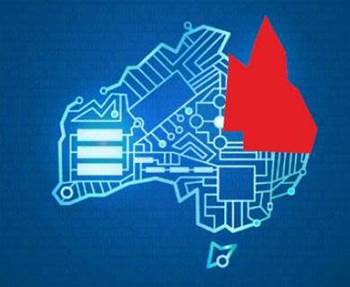 Campbell Newman’s LNP government knows a lot about criticising IT – the $1.25 billion failure of Labor’s health payroll overhaul was one of the most successful barbs of the 2012 election campaign.

In the third instalment of iTnews' State of IT study, we ask whether it can walk the talk and do a better job itself?

Soon after the election then Queensland Government CIO, Peter Grant, was commissioned to audit sector-wide IT in forensic detail. The resulting 1000 page report revealed the extent of the state’s IT decay – but not how the debt-burdened state should pay for the backlog of upgrades it urgently needs.

And there remains a tangible gap between rhetoric and action that keeps the sunshine state behind their southern rivals in NSW in terms of our IT maturity index. Queensland ranks second according to the iTnews scorecard with eight points out of 12.

The way the Newman Government’s has embraced cloud sourcing with something approaching religious zeal is no exception to this trend. In May 2013, Minister for Science, IT, Innovation and the Arts, Ian Walker, announced that Queensland would become the first Australian jurisdiction to go ‘cloud-first’ in keeping with a procurement principle set by US and UK governments where cloud options are treated as the default and non-cloud purchases must be further justified.

Now, more than a year later, the Minister has only now released detail on what that announcement will really mean for agencies. Tech procurements “must consider first cloud-based solutions in preference to traditional ICT investments” the state has decreed.

Is the strong arm approach too dramatic? States don’t have a great track record when it comes to trying to impose central mandates across a large and sprawling public sector.

If nothing else, the Department of Science, IT, Innovation and the Arts can finally get cracking on its much-vaunted cloud email migration now that the state has renewed its volume licensing deal with Microsoft to include Office 365.

It was a bad look having the state’s flagship cloud project floundering nearly six months after the anticipated go live date.

But the Microsoft deal appears to be another signal that this government is stronger on rhetoric than action when it comes to technology. Promoted as a 149,000 seat cloud email migration, the deal offers no guarantee that agencies will take-up the 365 opportunity.

Outsourcing has been pinned as the other solution to breach the divide between Queensland’s technology needs and its bank balance.

The minister has vowed to “safely but aggressively” reduce the state’s ownership of ICT assets and “non-critical software applications”. Government owned infrastructure provider CITEC will be gone in a couple of years and each agency has been tasked with putting forward a roadmap for the divestment of its own selected internal functions.

But it still hasn’t revealed its hand in terms of funding to prep agency IT shops to be outsourced. The dividends of this sort of move could still be several years off, while agencies need to start transitioning of Windows XP in huge numbers. DSITIA will be hoping that the IT strategist it might need in the future wasn’t a member of the army of IT workers it has made redundant since coming into power.