Fibre to the Horizon

[Blog post] Why we're having the wrong conversation about the NBN.

It's now been a little over six months since the election that saw the Liberal Party defeat the Labor Party at the nation's polling booths.

As with any election, there was debate over whether the ALP might have landed on the right combination of leadership and policy with enough of the race to run in order to emerge victorious, but I suspect it's uncontroversial to suggest that the majority of observers expected what the outcome ultimately was - a change of government, with a change of priorities and a change of policies.

Perhaps of the most interest to the technology sector is what the fate of a national broadband network would be. The ALP got the ball rolling on an NBN in the lead up to the 2007 federal election, and spent the next few years delivering an evolution of several different technology talking points.

The final idea was a decade-long horizon to deliver fibre to the premises everywhere geographically possible, with fixed wireless and satellite to round up the mix.

The Coalition also had a range of ideas over the course of the subject, initially flatly opposing on grounds that improvements to broadband of the scale described (regardless of the technology selection) were manifestly and typically excessive.

In the dusk of the 43rd Parliament, the Coalition had settled on fibre to the node, fixing the problem as far as the bus stop and relying on the copper network up to the front door.

To review the debate before and after the election, you'd be forgiven for thinking that copper exhibits roughly the same physical properties and resilience as Gruyere cheese, or that delivering any sort of quality broadband as a national policy priority would cost more than every Apollo mission combined in today's dollars.

Perhaps the conversation has flourished most outside of the areas where you might expect it to be of the highest quality - bloggers, "social commentators", pure technologists and politicians from marginal seats.

For the to and fro, and for all of the different competing policy positions, one thing was abundantly clear to anybody with a head for public policy - some variation on the Liberal National coalition's policy would be the one to be implemented if anything were to be done at all.

The alternative possibility would be an ALP government defending a contentious proposal by triumphing at four successive sets of ballot boxes without conceding the meat and potatoes of their policy to do it.

No political party has enjoyed the electorate's favour to that extent in the two centuries that Australia has existed in its present form.

Whether or not that's understood, the debate continued.

Columns to the tune of:

"if Australia doesn't have GPON-based fibre to the premises, the national economy will collapse to the point that all industry will depart our shores - our education, healthcare and national infrastructure is pinned to its immediate rollout"

are still being written, while the other side of the fence trumpets:

"Labor's NBN was an irresponsible commitment of a bowel-shaking sum of money to solve an edge-case problem experienced by graphic designers in Brunswick when a range of amorphous technology responses could be implemented tomorrow for next to nothing."

It's been six months, but we haven't progressed at all.  It's still "we need 1Gbps to avoid an extinction level event" versus "a government spending money like drunken sailors in a Jaycar outlet on things I personally don't need".

If the conversation stays where it is, the elephant in the room - that the ALP didn't win a record breaking series of elections in order to fit the light on the hill with a 1Gbps line card – will win by default.

What's needed now is an honest, measured and considered policy discussion about what broadband needs exist in Australia.

This conversation is one for everyone's participation, but the voices that take the form of partisan, emotional indignation that anybody would consider copper when fibre is resistant to rain inundation in telco pits, and the voices singing to the talk-back choir as a vehicle for derision of any progressive infrastructure policies that aren't agriculture or mining, all need to be considered in context.

People selling things need to be set aside, and the ability for people to turn on Q&A and have their blood pressure unaffected isn't important.

Ultra high-speed broadband investment is not necessary because a Cisco Certified Network Associate on Tumblr thinks it is, and it's not a bad idea because a suburban self-funded retiree with an iPad visibly not connected to the wall would prefer funding expansion of the pharmaceutical benefits scheme.

Public policy advances are a good idea when we understand more than that.

What specific policy problems are we trying to solve with broadband? Note this is a distinct question from what policy problems can vendors solve with their emerging product families that have native support for high-speed networks or are cloud-based and require on-premise user experience from Amazon's Virginia data centre.

Further, it's important to note that "fast internet" is not a solution to literally any policy problem at all, any more than "$50 billion staying in the budget and available for other things" is a meaningful plan either.

What needs to be publicly articulated for the first time ever is the minimum infrastructure requirements in terms of speed, availability, reliability, capacity and resistance to obsolescence that is required to cover each social outcome we want.

Whatever the most needy electorate use-case is that we are willing to support becomes the benchmark, and that automatically picks losers in the race for what technologies you can use to deliver national infrastructure.

Focusing on that will allow us to tune out petitions pleading minimum standards based on comparisons to incomparable countries in the OECD (or the developing world for that matter), as well as the vexation older generations express at significant public investment in technologies that arrived since the cotton gin. We will be freed up to focus on what the internet is actually meant to do here.

Quotes in op-eds about "Why anyone would wish to deny the nation the latest-and-best in essential infrastructure is confounding for an economy that must compete globally" would then have an answer (because latest-and-best doesn't equate neatly to fit-for-clearly-articulated-purpose).

Australia would have an agenda for national technology infrastructure that is grounded in examination of our problems and how solutions map to them. The yelling and screaming across Blogspot would die down to its previous standing-next-to-a-launching-rocket volume, and we would have a path forward.

A path to delivering life quality support for the Commonwealth, with the rhetoric about 50Tbps wireless demonstrations in Europe and how the copper network was built before the internet existed, all behind us.

Let's have this conversation. The other one didn't work. 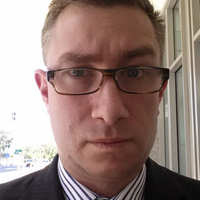 Geordie is a Sydney based technology professional and politics nerd. He's an infrastructure lead for a financial services company and has worked tech roles with vendors, private business and government. When not building systems, he’s worked with and for civil liberties organisations, political parties and digital policy communities.
Read more from this blog: The Cable Guy