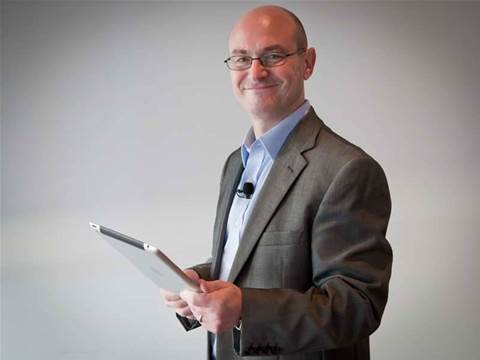 Westpac CIO Clive Whincup has resigned from the bank to join Woolworths as the retailer's new chief information officer.

News of the hire was first reported earlier this afternoon by the Australian Financial Review.

Woolworths had been hunting for a new CIO since October last year, when Dan Beecham announced his departure to British supermarket chain Morrisons.

Damon Rees has been acting as the Woolworths CIO in Beecham’s absence. Rees is a former stalwart of Westpac IT, with a ten-year career that included head of integrated delivery and head of enterprise infrastructure.

Rees was named as a finalist in this year's iTnews Benchmark Awards for his work on driving Woolworths' Project Leap - which has moved over 26,000 staff from a traditional Windows SOE to a mix of Google Apps, Citrix and ChromeOS.

A Woolworths spokesperson said the company was looking forward to welcoming Whincup to the team in the coming months. Whincup's date of departure from Westpac and date of arrival at Woolworths have not yet been confirmed.

"Clive’s experience of retail in a banking context and his leadership of large scale IT programs will be of great value to us in shaping the next phase of development of our technology journey," the Woolworths spokesperson said.

Westpac's retail bank, meanwhile, is amidst the second major shake-up of its IT executive in three years.

In late 2013, CTO Jeff Jacobs was made redundant and Whincup was given a new "blue sky" role within the bank, effectively replaced by former general manager of investments Les Vance. Vance was tasked with the new role of COO of Technology.

It was little over two years since the retail bank's last major executive reshuffle, under which long-time CIO Bob McKinnon exited.

A Westpac spokesperson said while the bank intends to replace Whincup - assumedly in a CTO-style role - there would be "no impact on the bank's IT leadership team" as a result of Whincup’s departure.

Paul Spiteri, Westpac's head of payments and shared services has been asked to stand in as interim CEO.

"Paul has acted as Clive’s delegate on a number of occasions so is familiar with the team and the responsibilities of the role," a spokesman for Westpac told iTnews.

Westpac wished Whincup well and said in a statement that the executive had played an important role in the delivery of Westpac's technology strategy.