Microsoft's tablet contender, Windows RT, has not set the worldwide markets on fire with OEM shipments being less than half of the predicted volumes, according to news reports.

Furthermore, the actual sales of Windows RT tablets are likely to be less than a million devices, the vendors said.

The reason for the poor sales for Windows RT is due to a large number of applications not being compatible with the operating environment, OEMs are reported as saying, along with Microsoft launching its own Surface tablet.

Microsoft's Surface RT with an ARM-based processor is not thought by analysts to be a sales success either. Estimates of sales range from a pessimistic 230,000 to an optimistic one million units, analysts quoted by Barrons said. 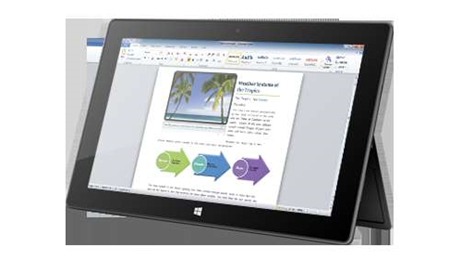 The company recently readied the Surface Pro tablet that features an Intel processor and which runs standard Windows applications, for shipment next month.

Only one million Surface Pros will be shipped, according to supply chain sources speaking to Digitimes, pointing to pessimistic sales expectations for the tablet.