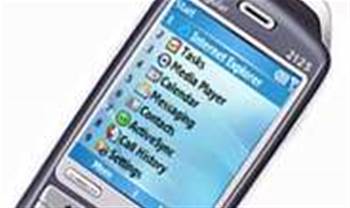 Windows Mobile 6.1 is available now, and will likely start appearing on new handsets by summer. Some vendors will also be able to offer upgrades for current Windows Mobile 6 devices, according to Microsoft.

The update brings a new focus on usability, with a revamped home screen that shows the top items users need to access, such as voicemail, email and calendar. A sliding bar lets the user highlight each item to view more details. The updated system also makes setup and configuration easier, offering one-click pairing with a Bluetooth headset, for example.

Device management support is by far the most important feature for corporate customers, said Jeremy Green, principal analyst for enterprise mobility at Ovum.

"Big enterprises have been waiting for this, believing that Microsoft would eventually sort it out," he said. However, he cautioned that the new platform's reception would depend on how well Microsoft has executed those features.

This is delivered in Windows Mobile 6.1 via support for Microsoft's new management tool, System Center Mobile Device Manager (MDM), which is also now available to purchase.

MDM offers a greater level of control than the management functions provided in Exchange mail servers, and allows IT managers to secure phones just as they do desktop PCs, according to Windows Mobile group product manager Scott Rockfeld.

"You can connect smartphones to Active Directory and manage via Group Policy. Buyers can now rest assured that if they bring in a phone, it will be accepted by their firm," he said.

MDM only supports handsets running Windows Mobile 6.1, so older phones must continue to be managed by Exchange or a third-party solution. But MDM supports the Open Mobile Association's Mobile Device standard and so will be able to manage non-Microsoft handsets in future, the company said.

The other major new feature is an enhanced Internet Explorer that renders web pages in full, and allows the user to pan and zoom to read a selected area. Microsoft has promised further enhancements, including support for plug-ins such as Flash and Silverlight, later this year.
Got a news tip for our journalists? Share it with us anonymously here.
itweek.co.uk @ 2010 Incisive Media
Tags:
enterpriseclassgetsmobilesoftwareupgradeswindows