Windows 8: Under the hood 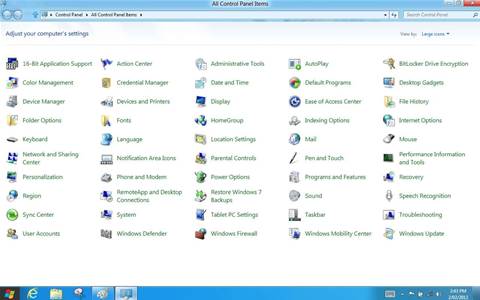 Part One of iTnews' enterprise guide to Windows 8.

The nature of personal computing has been in flux for the last few years. The advent of the smartphone and recent explosive growth of tablet and touchscreen desktops has put pressure on Microsoft to rethink the keyboard and mouse driven interface of the first seven versions of Windows.

Windows 8 looks like a completely new operating system. But is the facelift only skin deep or has Microsoft attacked the underlying foundations? Although the client version of Windows 8 has been given lots of attention, it's worth noting that a new server version will also be coming.

NTFS, the standard file system for Windows, is now well over a decade old. Introduced as part of Windows NT, it has served well but Microsoft has begun the shift towards the all new Resilient File System (ReFS). Built upon NTFS, ReFS will first appear in Windows Server 8 before finding its way into client systems.

Microsoft continues its tradition of maintaining compatibility with predecessor systems. Although ReFS is built on the foundations of NTFS, it doesn't simply expand the NTFS feature set. Some features have been replaced while new ones, such as the ability to automatically verify and repair data without having to take other operations offline, are a big improvement.

There is a detailed discussion regarding how ReFS is built and works here.

The majority of Windows Server deployments we've seen use the full GUI (graphical user interface). Server Core, a totally headless and GUI-less mode has been around for a while but now becomes the default mode when a server is installed.

What Microsoft has done is modularise the GUI so that it can be installed or removed. Running as Server Core, it's expected that there will be less server patching required. The server management tools have been revamped so that administrative tasks can be more easily completed when compared to the Server 2008 Server Core.

This is part of Microsoft's broader cloud strategy where servers are managed as pieces of infrastructure rather than as computers. The management tools will also support multi-server management. PowerShell will be souped up with the number of cmdlets increased tenfold to 2300, effectively replacing other tools such as VBScript, Command Shell and netsh.

One of the most interesting things is that the entire management API will be opened so that third parties can integrate and/or write their own UIs. If you use a third-party system monitoring solution then you should be able to see the Microsoft management and other tools all through a single interface.

Storage virtualisation for the masses

Another new feature, Storage Spaces, allows the easy pooling of multiple storage devices so that they appear as a large, single, logical volume. Many users have two or three external hard drives connected with one full and the others empty, but aren't able to take advantage of the free space.

Storage Spaces allows you to use drives that are connected through USB, SATA, or SAS and see them as a single volume. When a Space runs out of capacity, it can be easily extended by simply connecting another disk and then using a wizard to add the new capacity. This is similar to the Linux Logical Volume Manager.

Storage Spaces will be both a client and server feature.

Having installed the Developer Preview, it's clear that Microsoft has continued to focus on streamlining the installation process. There is no offical word yet but we would expect fully automated installations using System Center Service Manager to work just as well with Windows 8 as they did with Windows 7.

System Center has just been updated, perhaps in anticipation of widespread Windows 8 deployments.

Professionals wanting to create customised, automated installations can use the new Assessment and Deployment Kit that replaces the Windows Automated Installation Kit. MSDN members can download the kit via their MSDN account.

Although most organisations that moved from Windows XP to Windows 7 would have found that they needed to do some work on their Active Directory structure and organisation, those that took the less common path from XP to Vista and then Windows 7 found the transition easier.

Indications from the Developer Preview are that there have not been any major changes to Active Directory under Windows 8. That doesn't mean nothing has changed. One significant improvement is that AD can now be virtualised more easily and with less risk.

The process of updating the AD has been further refined with a single Active Directory Domain Service Configuration Wizard that integrates the ADPREP forest and domain upgrades and DCPROMO domain controller promotion processes.

This is the first in a three-part enterprise guide to Windows 8. Read on for: