Windows 8 to go on sale by October 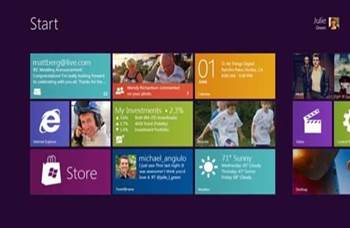 Tablets in time for Santa.

Microsoft's Windows 8 operating system will go on sale by October this year, according to a Bloomberg report.

The date falls in line with a hint that Microsoft gave in January at the CES conference in Las Vegas.

Microsoft must release Windows 8 machines by September-October since "the last thing Microsoft wants is to have is ... no compelling Windows tablets at a time when the new iPad look like it's going to be a good seller for the holidays," said Gartner analyst, Michael Gartenberg.

Bloomberg reported there would be three WOA devices - the codename given by Microsoft to its ARM processor-based tablets.

Windows boss Steven Sinofosky already said in February Microsoft was working with NVIDIA, Qualcomm and Texas Instruments for its tablets.

The ARM experience should be "exactly the same" as Windows on the x86/64 Intel chip architecture, except they will be more restricted.

Analyst firm IDC today gave an optimistic estimate for the impact Windows 8 will have on PC shipments in the second half of 2012, predicting 5 percent growth in 2012 compared with 1.8 percent for 2011.

Consumers were holding off PC purchases because tablets "like Apple's iPad are proving to be a powerful distraction", said IDC analyst Bob O'Donnell.

However the Windows 8 tablet rollout is expected to be a shaky one.

Fellow IDC analyst Jay Chou said "meshing a tablet experience in a PC body will likely entail a period of trial and error", meaning only modest growth for Windows 8 tablets in the near term.

Microsoft will reportedly hold an event for industry partners in April where it reveal more of its strategy.