Why Microsoft's new militarism is really aimed at Google 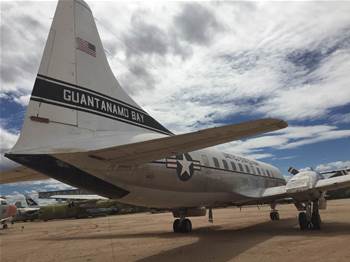 Microsoft has launched an overt pro-military push to differentiate itself from key competitors in the cloud computing space, with the company’s president, Brad Smith, using an official blog to spell out the software giant’s support and commitment to US forces.

Published on Friday (Saturday Australian time), Smith’s pledge strongly declared that “when it comes to the U.S. military, as a company, Microsoft will be engaged.”

The stand draws a line in the sand, unambiguously in favour of the US government, about what kind of public and defence sector work Microsoft intends to pursue. Short version: all of it.

Microsoft presents an ethical logic for its stand (we’ll get to that in a moment), but the real message here is aimed at government and military customers, and not just in the US. And that message is that Microsoft’s executives are firmly in control of what work it chooses, rather than its employees.

“Over the last few months there has been a debate in our industry about when and how technology companies should work with the government, and specifically whether companies should supply digital technology to the military, including here in the United States,” Smith wrote.

“First, we believe in the strong defense of the United States and we want the people who defend it to have access to the nation’s best technology, including from Microsoft.

“Second, we appreciate the important new ethical and policy issues that artificial intelligence is creating for weapons and warfare. We want to use our knowledge and voice as a corporate citizen to address these in a responsible way through the country’s civic and democratic processes.”

Now there’s a bunch of take-outs from the carefully nuanced and lengthy blog, but the realpolitik is that Microsoft is trying to create a competitive differentiator as it seeks to reclaim market share. Locking down government and military business is part of that.

The commitment to the US military not only implicitly extends to the wider US government, it also ropes in its allies, and that includes Australia.

At a commercial level that's a very clever strategic play.

If successful, Microsoft will cement into place long-term deals for software and services for defence and government technology renewal programs to provide a broad base of reliable and sticky revenue in an age when licensing time frames are shrinking.

Tactically, it’s cleverly opportunistic because it capitalises on fears within military, security and other government circles that the likes of Google aren’t still mature enough to deliver in this space both at an application security or cultural level.

It’s like dealing with a very smart, but very moody teenager.

Microsoft’s miltech missive shouts out that companies like Google carry inherent project delivery risks because of the culture and influence of their staff who want to influence the kind of customers it does business with.

It certainly doesn’t have to be true to be effective; even if Microsoft probably believes it.

Take this charming little dalliance with populism from Smith: “We want the people of this country and especially the people who serve this country to know that we at Microsoft have their backs.”

If this, rather simplistically, fuels a cultural stereotype and the convenient ‘civilianist’ vs ‘militarist’ divide in the technology industry – even if the reality is way, way more complex – Smith and Nadella seem OK with that.

In Australia Google’s attempts to get its cloud-based G-Suite applications into government have become bogged down the lengthy wait for defence department security certifications.

Exploiting the gap, Microsoft, after (quite rightly) being cast as a poor value proprietary lock-in, is enjoying a resurgence as pent-up demand for cloud in agencies looking for productivity uplift (think AI) and value (love that elastic) move quickly.

Redmond also has an incumbency advantage in that an entire generation of government and military staff have been raised on Office and Exchange so won’t have to undergo CBT to re-learn how to use email or word processors.

In the mind of a senior bureaucrat, such change challenges are only really worth it if the cultural shift enables a bigger benefit.

Throw some FUD in the mix about whether a vendor will still support your agency’s work medium to long term, and the cautious approach usually wins.

The kind of ethical reflux Google has been suffering over JEDI (rightly or wrongly) simply wouldn’t bear thinking about when likes of Oracle, IBM, Cisco or HP when bidding for government and military work.

Notably, Smith’s piece also contains a quite potent message for Microsoft’s employees and partner community. It’s that Microsoft has made a choice, it’s a public one, so no-one can complain they weren’t told.

There’s some accommodation about non-military alternatives and the ability to choose projects along the lines of “we support talent mobility” – but it’s also deliberately finite because Smith and Nadella are mapping the road down which Microsoft is headed.

The issue of potentially dual use technology, especially AI, gets a mention. But it’s cut down to consumable size courtesy of the argument that government, the military and technology industry have always faced ethical choices, just ask any chemical engineer or nuclear physicist.

Indeed most of the stayers in ‘enterprise and government’ technology either sprang from or were fuelled by military R&D. Before speculative venture capital arrived, that’s where the money came from.

Like IBM before it, Microsoft is allowing its competitors to go on a journey of self-discovery about their place in the on the global stage.

Leaders at Google, Twitter and Facebook all once believed their products could change the nature of inclusive democracy, politics and public discourse. And they probably did, not that the results in terms of fair election campaigns or civil political discourse look to have been winners.

Both government and business are getting cold feet about where the last decade in technology culture has landed them.

And Microsoft is selling socks.