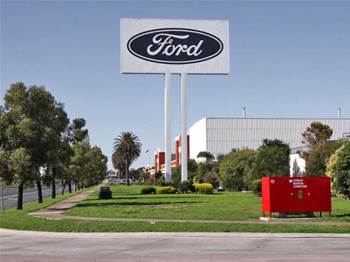 Bringing SAP platform down under.

Ford Motor Company will bring a long-running service parts management system to its Australian and New Zealand operations from the second half of 2019.

Speaking at the Sapphire Now and ASUG conference in Orlando, global CRM manager Michelle Nemeth said planning had now started for the rollout of the SAP-based system throughout Asia Pacific.

Ford struck an alliance with Caterpillar and SAP back in 2002 to jointly develop a next-generation spare parts management system. Both vehicle makers would benefit, and SAP could on-sell it to others.

The system manages the entire supply chain for spare parts supply and logistics involved in getting parts from the supplier to the dealer or “customer user”.

Ford has spent about a decade bedding down the various components of the system in its operations in Europe and the United States.

“We started with one area because we had no experience with SAP,” Nemeth said.

“So we started with supply chain in Europe because the systems in Europe were much older than the ones in the US. There was a lot of concern about the stability, and we had lost a lot of the legacy SMEs [subject matter experts] that really understood the applications [there].”

From there, it brought the same supply chain work stream to the US – “and then our implementations [in Europe and the US] started to run in parallel,” Nemeth said.

The car marker continued to deploy more components into its parts supply & logistics business in the two major markets, and last year set live the “last leg” of the system, which covers commercial and finance process optimisation and harmonisation, in France.

It had intended to continue to drive the commercial and finance portion of the system into the rest of its European operations - some “17 markets over the next four years, and then start in the US.”

But Nemeth said a “much stronger” business case had since emerged in the Asia Pacific, and that some of its efforts have now been redirected to bring the entire service parts management (SPM) system online in that region.

The emerging business case is particularly predicated on growth in China, where Ford has a 50:50 joint venture called Changan Ford. It will be the first country in Asia Pacific to see the SPM system.

“The China launch is going to take us a while [owing to complexities such as legal requirements, local language, and time zone differences]. Then, we’re going to go through other Asia Pacific countries.”

SPM’s introduction to the Ford parts supply & logistics business in Asia Pacific will occur much faster than in Europe and the US.

“We’re going to launch everything ‘big bang’ from now on,” Nemeth said.

“We’re not going to have phased launches - we can’t support it, there’s too much rework and it just takes too long.

The implementation in China is intended to run through 2018-2021, with all major streams to run in parallel. Work in Australia and New Zealand is targeted to begin in the second half of 2019 and wrap up at the end of 2021.

Thailand, India, Taiwan, Vietnam and the Philippines close out the Asia Pacific installations, with most of the work there planned for 2021. After that, the project shifts to Ford’s South American and Canadian operations.

All global deployments of SPM will be run out of the existing North American instance of the system. Europe will remain on its own, separate instance.

“As we go global we’re making changes to the North America one to make that our global SAP solution,” Nemeth said.

Those changes are largely to do with scaling that SAP instance to cope with what will eventually be follow-the-sun demands on its resources.

“We’ve got to scale it because we have huge batch jobs that are running right now [in the North American instance] that are [otherwise] going to be [running] when Asia Pacific is going to have to work,” Nemeth said.

Ry Crozier is attending SAP's Sapphire Now and the ASUG confernece in Orlando as a guest of SAP.