Why Australia is an Apple Black Friday bellwether 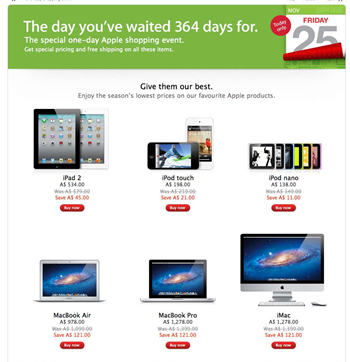 Apple enthusiasts in the US have been keeping an eye on Apple's Australian Black Friday sales for a clue as to what to expect there.

That came at about 3am Sydney time Friday when Apple sent its Australian database an email flagging Black Friday -- "the day you've waited 364 days for" -- which falls after Thanksgiving and, for Americans, marks the beginning of Christmas shopping with big discounts.

Apple has shared the tradition with Australians since 2008, which Reuters notes is "the single biggest shopping day of the year" with all major US retailers offering discounts.

Apple enthusiast sites such as 9to5 Mac use Australia's 19 hour jump on the US west coast as a bellwether for their, more culturally relevant, Black Friday sales.

This year Apple offered Australians discounts of between seven to eight percent on core products and over 10 percent on peripherals.

Peripherals also got the chop with even larger discounts in percentage terms. The Magic Trackpad, 2TB Time Capsule, and wireless keyboard were all discounted by over 10 percent.

The discounts were on par with 9to5 Mac's sources on Wednesday, which relayed correctly that Apple would give better discounts for its higher end iPads and iPods.

But for Australians Black Friday is more likely to connote something darker than post-turkey and pre-Christmas discounts.

The devastating 1939 Black Friday fires in Victoria killed 71 people, surpassed in lives lost only by Victoria's 2009 Black Saturday fires and the Ash Wednesday fires that spanned South Australia and Victoria in 1983.