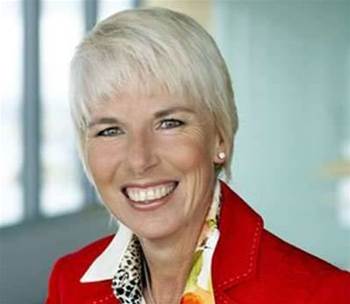 Westpac has fleshed out plans to enter into shorter outsourcing deals with a panel of suppliers, as it moves to complete its $2 billion strategic priorities initiative.

The internal technology revamp, dubbed "best sourcing", aimed to cut down its number of large, lengthy outsourcing deals with major suppliers in favour of outsourcing key projects to specific players in three-to-four-year agreements.

The bank spent the greater part of the last financial year building a commercial pricing team to negotiate new outsourcing contracts with a panel of suppliers, with Westpac's general manager of commercial and technology Elizabeth Henderson calling an end to ten-year "mega deals" earlier this year.

When the bank renewed a long-running, $US2.3 billion contract with IBM last November, it reduced the term to five years, instead of the usual ten.

"We plan to make a step change in 2012, bringing to our critical technology applications work the same rigour, discipline and cost efficiency that we introduced in the infrastructure space through our new IBM contract," she said.

It would involve "systematically identifying and engaging the most skills and cost efficient resources to identify functions or processes whether they work through us directly or indirectly through one of our local or off-shore supplier partnerships".

The new sourcing arrangements support an ongoing productivity program that was credited for delivering $200 million in benefits over the 2011 financial year.

Kelly said the bank was in negotiations with possible suppliers. Favourites reportedly include Tata Consultancy, Infosys, Wipro and IBM.

Suppliers would effectively "own the function" given to them by the bank and be made responsible based on criteria set by Westpac, as a result of continued consternation from Westpac technology executive Bob McKinnon around the organisation's involvement with IBM.

In July, Westpac's Henderson called for suppliers to "bring their A-team" to future contracts with the bank.

The best sourcing model would likely lead to a cut in the number of technology staff at the bank, which grew by more than 1000 in the past two years as a result of the bank's $2 billion strategic investment priorities (SIP) project.

Westpac has completed six of the total 14 priorities outlined at a cost of $1.1 billion. Those priorities delivered consolidated customer information and credit card platforms across the bank's brands. 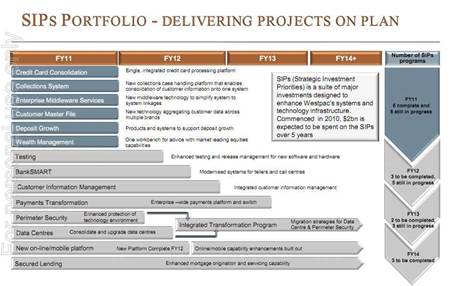 The bank planned to complete the remaining priorities by 2014, focussing this year on new teller and software testing systems and revamped online and mobile platforms.

A data centre consolidation plan - moving from nine facilities to two - would likely also take place next year, though would feed into a larger transformation program that would last until the end of the priorities initiative.

"At the moment a lot of processes sit in the heads of individuals who have been in the organisation for a long period of time - we now take the time to document them really clearly so as we hand that work over to the supplier they have those processes and they then work to improve them," she said.