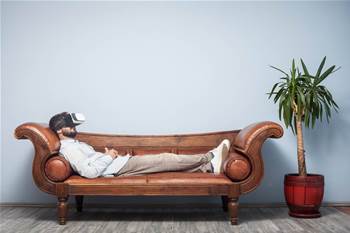 Virtual reality is shaping up as a promising tool for delivering mental health services to remote areas, with a new study from the University of Wollongong showing the immersive experience outperforms video platforms like Skype.

The research was conducted by Dr Shiva Pedram, who has previously worked with the coal mining industry to develop VR applications for training needs in mines located far from urban centres.

Pedram’s latest research expanded the concept to examine how VR could be used to support workers in high-risk situations like mining who don’t have ready access to mental health services.

“In any workplace there are going to be issues such as bullying, PTSD, anxiety or depression, yet there is no or very limited professional support for those working in remote locations,” she said.

Using an Oculus Go VR headset and Skype, the first stage of the research compared the experiences of 30 ‘clients’ between the ages of 20 and 70 when connecting to a psychologist in mock counselling sessions.

Clients reported a heightened sense of presence during the VR therapy sessions, and it also proved more power in building client engagement and commitment to the therapy - an important factor given rates of early treatment termination appear to be significantly higher among remote workers when using other technological interventions.

Surprisingly, the psychologist’s stylised virtual representation as an avatar was also found to help some of the clients.

“One participant – someone with an outgoing personality – told me how they knew someone was listening to them, but the fact that they couldn’t see them liberated them from the fear of being judged,” she added.

The next stage of the research, which will begin next year, will use the updated Oculus Quest headset to accurately replicate hand movements.

Pedram will also monitor client’s physiological response to the remote counselling sessions by collecting data including skin conductance and heart rate to gain a more accurate understanding of the effectiveness of the treatment.

The research was supported by $45,000 in funding from Coal Mines Insurance, Mines Rescue and Advantage SME.