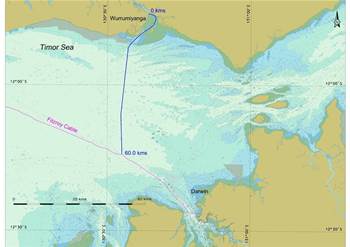 To give Tiwi Islands an alternative to microwave.

Vocus will use a branching unit off its north west cable system (NWCS) to run a subsea cable between Darwin and the Tiwi Islands.

The project represents the first time that Melville and Bathurst Islands will be connected to the mainland via fibre optic cable, having previously relied on microwave links.

Vocus Group CEO Kevin Russell said in a statement that the microwave links were often interrupted by tropical conditions including poor weather.

The new 60km subsea spur cable will be built, owned and operated by Vocus under a capital grant arrangement with the Northern Territory Government.

A capital grant is offered for projects "including the construction of new facilities, extension to or upgrading of existing facilities and the purchasing of equipment. It does not include general repairs and maintenance on existing assets", according to the territory government.

It is scheduled to be completed by the end of 2019.

Alcatel Submarine Networks (ASN) and Fugro will take care of the marine portions of the project.

It is anticipated that survey, manufacturing and deployment activities will take nine months, once technical specifications for the cable are completed.

The spur cable will use existing facilities at either end for landing stations.

The NWCS is a 2100km subsea cable that runs between Darwin and Port Hedland.