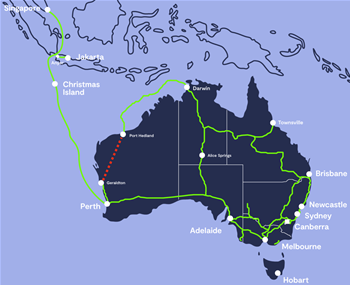 Vocus will deploy a 2000km high-capacity fibre link between Geraldton and Port Hedland in Western Australia by the end of next year.

“The first stage of this program of work is now underway,” she said.

“Project Horizon has been part of our long-term network extension plans for several years, and the high-level design work has already been completed.

“Tenders for construction and optical systems will be issued over the coming months.

“Once those tenders have been concluded and required permits have been secured, we start digging red dirt and laying fibre.”

Once laid and lit, the fibre will complete connections between Perth and Darwin, passing a number of significant resources operations, both onshore and offshore.

Sweeney said the Horizon system will be designed with transmission capacity starting at 38 Tbps per fibre pair.

“It will provide another layer of redundancy and give Vocus a ‘figure 8’ of network rings across Australia’s eastern and western States,” she said.

“It will allow Vocus to provide geographically diverse backhaul out of Darwin.”

Sweeney said the project will break “monopoly control of backhaul assets” into the Pilbara.

“Project Horizon will ensure that the existing monopoly in the Pilbara feels the full force of market disruption,” Sweeney said.

Vocus did not reveal the exact route the Project Horizon cable would take, citing commercial sensitivity.

Sweeney said that Vocus would also look to make other major fibre cable investments, particularly as it came under new ownership.

“While Project Horizon is the first major network expansion to be announced in Vocus’ new investment stage, it certainly won’t be the last,” Sweeney said.

“One of the big take-outs from the recent due diligence process with [acquirers] MIRA and Aware Super was that it validated our investment plans and the scale of the opportunity ahead of us.

“Vocus is already pursuing plans to connect our North-West Cable System to the Australia Singapore Cable.”

The North-West Cable System is a subsea route between Port Hedland and Darwin designed to service mostly liquefied natural gas (LNG) rigs tapping the north-west shelf. Vocus acquired it as part of its 2016 buyout of Nextgen Networks.

“Vocus is also planning for a branch of the North-West Cable System to Kupang in Indonesia, a second entry point into the huge Indonesian market complementing the Australia-Singapore Cable branch to Jakarta,” Sweeney added.