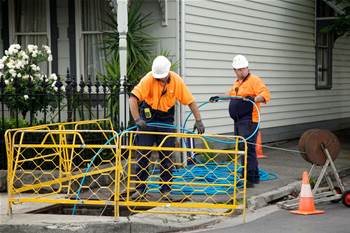 Civil works put to tender to get fibre rollout back on track.

Visionstream has given its first official indication of confidence in the new NBN Co management team by "accelerating" fibre rollout work in Tasmania while it attempts to re-negotiate pay rates.

General manager for NBN works, Allan Bradford, said in a statement today that Visionstream had "undertaken discussions with NBN Co, clarifying the approach for fibre delivery across the state".

The contractor has been scaling up its rollout efforts in recent weeks after a tumultuous period in which it came under fire from the new Government for allegedly slowing construction progress in Tasmania.

Communications Minister Malcolm Turnbull accused Visionstream in October of downing tools for at least two months. Visionstream denied it had stopped work, and Turnbull later backtracked on the suggestion.

Visionstream holds a $300 million contract with NBN Co to connect 200,000 Tasmanian homes and businesses with fibre within four years.

The acceleration is understood to be for works running into the first half of 2014. Bradford said the company is "issuing tenders for new construction civil works, as work packages are released by NBN Co."

"These are integral works to ensure the project remains on track and to get the network rolled out," Bradford said.

"Tasmanians will see an increase in work activity," a spokesperson for Visionstream told iTnews.