Virtual servers to roam across networks 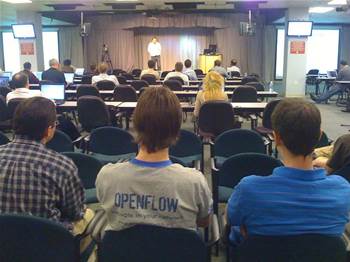 A consortium of University researchers has developed a way to make Internet switches and routers both open and programmable, a move that will allow virtual servers to roam between networks in real-time.

The technology, called OpenFlow, takes programs written to its standard, transmits instructions to each device via a secure channel, and then implements them in the flow table of the router or switch.

Flow tables are programmable by their nature, but that capability is poorly exposed to developers, and each vendor’s flow tables are different. OpenFlow provides a common set of functions and makes them explicit, the researchers said.

The Stanford-based team will demonstrate the technology at the Global Environment for Network Innovations (GENI) Engineering Conference at HP Labs later this week.

Consortium engineers created a server to run a first-person shooter-style game to be played by volunteers at Stanford and in Japan. The engineers used OpenFlow to program the networks’ switches and routers on Japan’s JGN2plus network and on Internet2, to optimise the traffic between the server and the game players, keeping network latency to a minimum.

In essence, they implemented algorithms that could move the server code to an optimal location to suit the needs of the gamers, without ever disconnecting users as the code roamed, the researchers claim.

Far from just being about gaming, the demonstration aims to show that OpenFlow can be used to program how switches and routers on the Internet direct packets of data, even when those devices are not compatible and have no overt programming interface, according to Guido Appenzeller, a consulting professor at Stanford.

“If you think about the new vision of cloud computing, this allows you to take a server running an application that has very onerous, real-time constraints, and optimise the position of this virtualised server in the global network,” Appenzeller said.

“We can move it to a server close to you to optimise your experience.”

OpenFlow is freely available at www.openflowswitch.org.

The OpenFlow Consortium includes researchers from several universities. Helping the consortium’s efforts are Cisco, Deutsche Telekom, Hewlett Packard, Juniper Networks, and NEC.
Got a news tip for our journalists? Share it with us anonymously here.