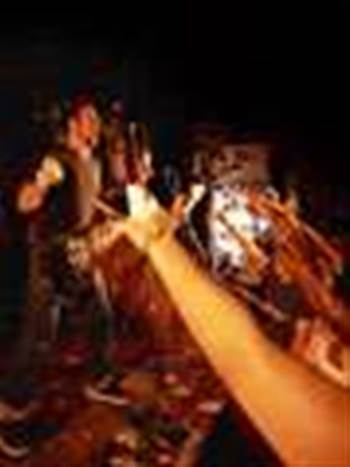 It is not often that the UK government spends a shed-load of taxpayers' money on launching a rock group, but that's just what the Health and Safety Executive (HSE) has done to promote wider public awareness of back pain.

The marketing campaign, which according to reports will set the HSE back £2.4 million ($6 million), is being promoted through advertising, posters and a new spoof website.

The 'backstory' (geddit?) goes like this: back in the mid-1980s, at the height of the group's career, several members came a cropper on the sell-out concert tour during which they performed wild onstage antics.

"Crouch's back seized up on stage at a gig in June 1989, and a month later, while bending to pick up his guitar, Ben Yorney was forced to end the Backbreaker Tour due to severe back pain," says the website.

The site points out that 80 percent of UK adults will suffer back pain at some point during their adult life. Most people manage to continue working, or return to work within a few days or weeks, despite the pain.

There's a happy ending to the Bäackpain story, however. New band manager David 'DeeBee' Brown is a more enlightened chap and adds a few support measures to the band's routine to ensure their 'comeback' (geddit?) this year.

To add authenticity to the whole spoof, there are connections from the site to a Bäackpain entry on MySpace, and you can even buy Ben Yourney's spandex outfit on Ebay.

Got a news tip for our journalists? Share it with us anonymously here.
Copyright ©v3.co.uk
Tags:
backbandpainrocktacklestraining & developmentvirtual