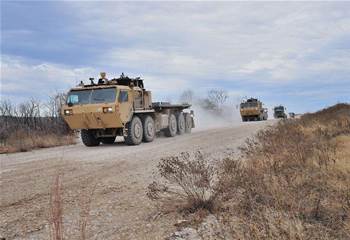 The US Army is a step closer to being able to operate fully autonomous convoys of vehicles, removing soldiers from dangers such as roadside bombs.

A test at a military base in Texas shows the vehicles "navigating hazards and obstacles such as road intersections, oncoming traffic, stalled and passing vehicles, pedestrians and traffic circles in both urban and rural test areas".

The technology — which can be fitted to "virtually any military vehicle" — is aimed at "completely removing the soldier from the cab" of convoy vehicles.

It was jointly developed by the US Army Tank-Automotive Research, Development and Engineering Center (TARDEC) and Lockheed Martin.

Wired reported that the US Government has been seeking ways to protect convoys from "suicide bombers, improvised explosive devices and other attacks".