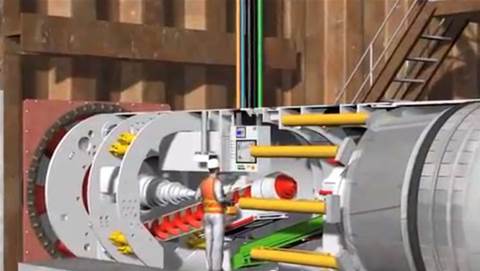 Santos GLNG is starting work on a 4.3 kilometre tunnel under a Queensland waterway that will house a gas transmission pipeline and fibre optic cables for communication systems.

Tunnelling officially began Monday using a boring machine that is 100 metres long, took a team of 12 people some six weeks to assemble, and is fitted with an array of technology systems.

"We have a guidance system on the [tunnel boring] machine which brings the survey in and it runs in via lasers into [the] operator's position," Thiess general manager of tunnelling, Steve Wille, said in a video posted to Youtube.

"[The machine operator] basically drives off a computer screen, so he's monitoring everything on the machine — thrust pressures, the torque of the cutter head, the power he's using, a whole series of parameters.

"In the day of computer technology, that is also being watched by engineers up in the office and in some projects we can actually feed that back to our machine supplier's office in Germany."

Thiess has a $134 million subcontract from Saipem Australia to construct the tunnel for the Santos GLNG project.

Once complete, the tunnel will ultimately connect an underground gas transmission pipeline on the mainland with a liquefied natural gas plant on Curtis Island, off Gladstone, as well as house associated umbilicals such as the fibre optic infrastructure.

Santos GLNG is a US$18.5 billion project that aims to convert coal seam gas from the Bowen and Surat Basins into liquefied natural gas. It is a joint venture between Santos, Petronas, Total and Kogas.

Santos is the second resources firm this year to take receipt of a sophisticated tunnel boring machine.

Rio Tinto is using a 64 metre-long Aker Wirth machine at its Northparkes mine in NSW that is also said to operate with a "high degree of automation".